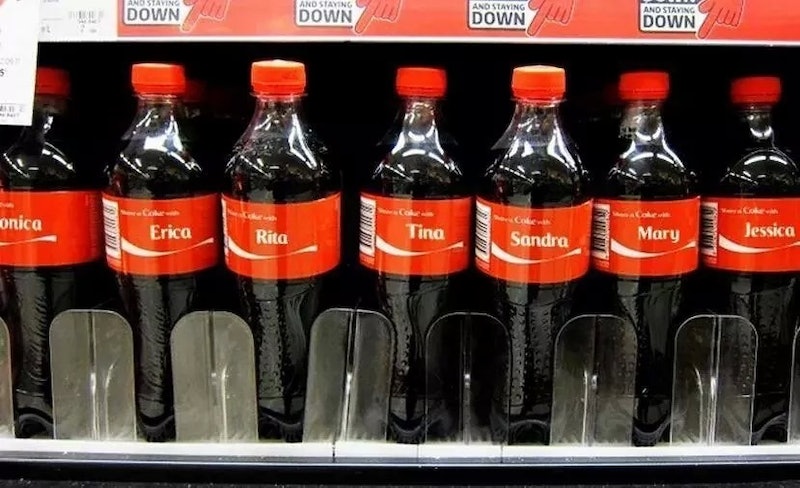 BuzzFeed gets the credit for drawing this one to our attention, but it’s too good not to share, so here you go: Some enterprising person somewhere used Coca-Cola’s #ShareACokeWith campaign to recreate the lyrics to Lou Bega’s “Mambo No. 5”… in Coke bottles. It showed up on Reddit yesterday, and it is quite possibly one of the best things ever to hit the Internet. Hats off to you, sir or madam. You win.

I’m not sure whether whoever snapped this photo just found the bottles like this or whether he or she actively searched for and arranged them as such, but either way, it gladdens my nostalgia-loving heart like nothing else. Is it possible that it’s a hoax perpetrated with the help of some clever Photoshopping? Of course. I really hope it’s not, though. It’s just too good. In case you somehow managed to make it through the late ‘90s/early 2000s without getting the lyrics for “Mambo No. 5” permanently seared into your brain, it goes a little something like this:

“A little bit of Monica in my life,

A little bit of Erica by my side,

A little bit of Rita’s all I need,

A little bit of Tina’s what I see,

A little bit of Sandra in the sun,

A little bit of Mary all night long,

A little bit of Jessica, here I am,

A little bit of you makes me your man.”

Concerning the ad campaign itself, Redditor stengebt hit the nail on the head when s/he commented, “Simplest advertising plan ever. Make the consumer do it since everything gets posted on Facebook and Twitter now.” While it’s true that not a lot of people are actually buying personalized Coke bottles and cans, #ShareACokeWith is definitely an example of crowdsourced advertising done right. Way to harness social media for the powers of hilarity, Coke.

“Mambo No. 5,” by the way, dates back to 1949; it was originally written by Cuban bandleader, musician, and composer Damaso Perez Prado, AKA “The King of Mambo.” Lou Bega’s version popularized it for a whole new generation when it hit the airwaves in support of his 1999 album, A Little Bit of Mambo. I will say this, though: Is anyone else kind of curious about what happened to Mambos One through Four?