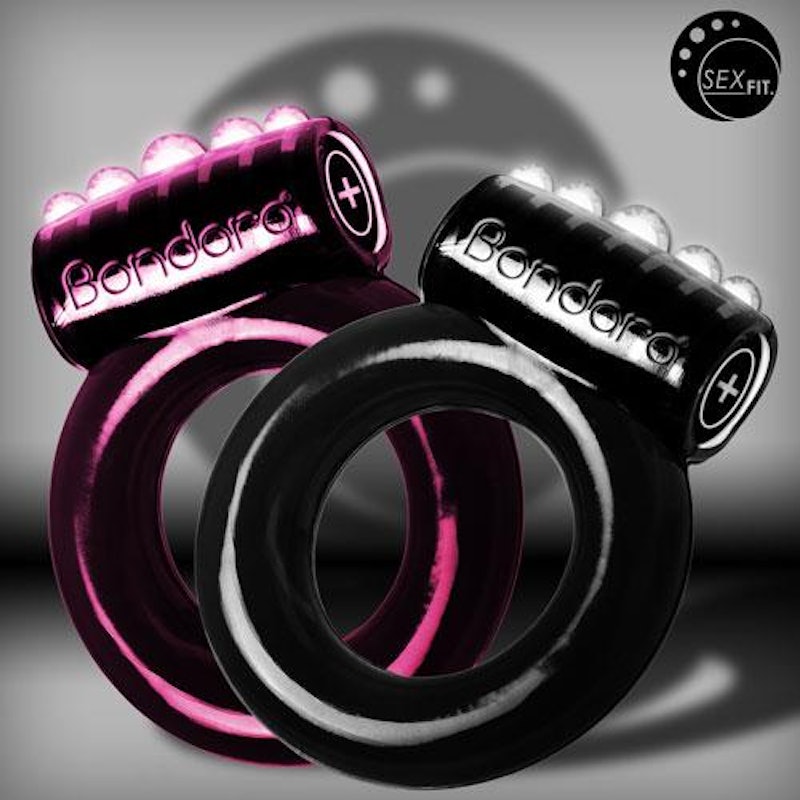 We’ve been seeing loads of devices described as “FitBit for your ladybits” lately, so it’s only to be expected that we’re starting to see their male counterparts, too. Ladies and gentlemen, introducing the world’s first (as far as I know, anyway) fitness tracking device for your penis: the SexFit.

Created by British adult emporium Bondara, the SexFit is… How do I put it?… Basically, it’s the highest-tech cock ring you’ll ever see. Like your standard cock ring, it fits around the base of the penis, trapping blood for a stronger erection and vibrating for adding pleasure. Unlike its predecessor, however, the SexFit also tracks how well you’re doing. Daniel Cooper over at Engadget called it “a pedometer for your penis,” which might actually be the most accurate description of it out there: It uses an accelerometer, a Bluetooth module, and a corresponding smartphone app to track your thrust-per-minute rate; it also measures how many calories you’ve burned, because, as we all know, a good roll in the hay is one of the best workouts you can get. For the curious, here's a closer look:

In Bondara's blog post about their new baby, buyer Louise Bagley said, "Historically, sex toys have always evolved with technology. Our device is a natural next step alongside the influx of personal health trackers and with the added benefit of improving an individual's sex life, we expect it to be a huge hit when it becomes available." Speaking of technology, you can even share your stats with your pals on social media. Personally, I’d caution against the sharing aspect; I’m all for open sexuality and all, but having the number of times one of your friends can thrust per minute pop up without warning on your newsfeed is about as welcome as an unsolicited dick pic — that is to say, never, ever welcome. At all. Seriously, you guys. Don’t do it.

It’s worth noting that the SexFit is still in development; according to the Huffington Post, it won’t hit the market until spring 2015. I suppose that means you’ve got plenty of time to get… excited about it? Or something?...

…That is not a pun I should have made. In the words of the Tenth Doctor: