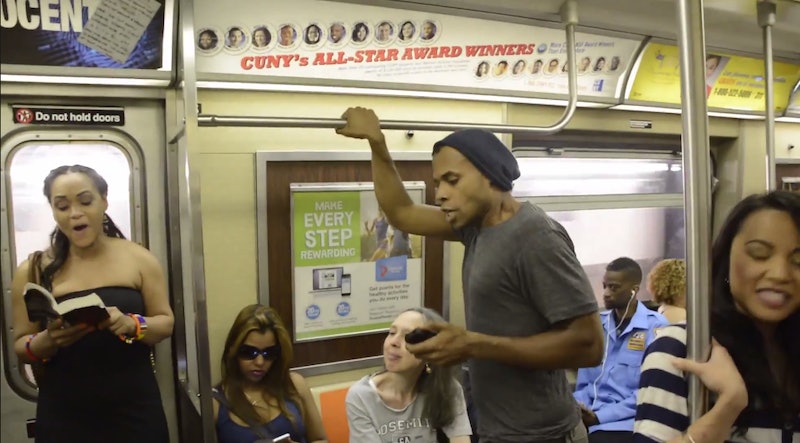 On June 28th, the cast of The Lion King on Broadway participated in a pretty cool promotional stunt; for one surprised subway car, they performed "The Circle of Life." In an unusual twist, most of the cast continued to read and look at their phones as they performed, as though they were just commuting with the minor addition of song. This stunt is reminiscent of the performance that The Lion King's Australia cast pulled on a flight earlier in the year.

Such performances serve as a good bit of viral marketing, though I wonder if the most recent stunt might have been better served by something more original. My question is: what do others on the vehicles think? The people on the subway look pretty startled and a little uncomfortable, especially at first. "Circle of Life" is a bit harsh, at least at the beginning, and those opening notes would be alarming for me to hear as an unsuspecting train passenger. The passengers seemed to warm to it as they figured out what was going on, though there also didn't seem to be all that many passengers. The train was pretty dominated by the cast, giving a very limited amount of people a show. But at least they could leave; the people on the plane in Australia were trapped.

Now, both performances escalated beautifully, and served as effective ads for The Lion King. However, I feel for the people on the flight, who maybe were thrown off or bothered by the performances. Being in close proximity to people singing their hearts out can be pretty uncomfortable; I know this because I went to art school. However, both videos are still a lot of fun to watch, as it's a great song and a pretty impressive feat to pull off.