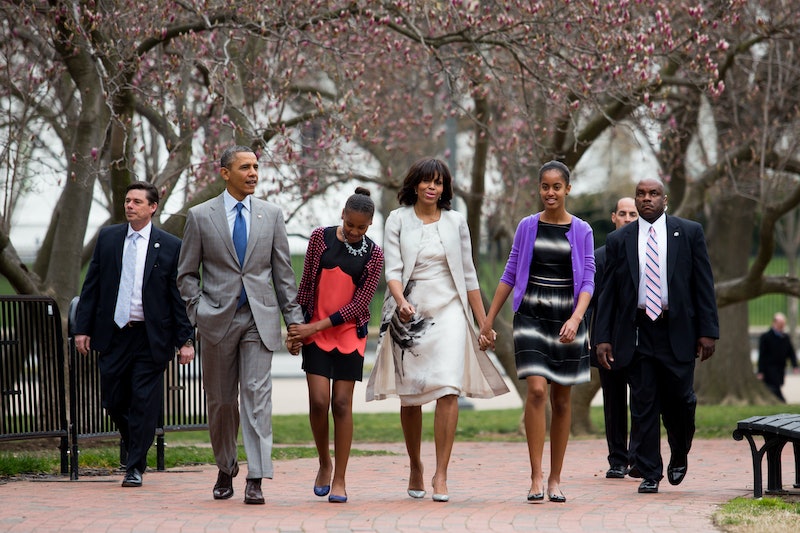 The number 44 is particularly meaningful for President Barack Obama. He's the 44th president of the United States of America, and as The Guardian discovered through its genealogy research, President Obama has 44 (distant) cousins in the Senate. Not a typo. Author and Guardian contributor AJ Jacobs is currently conducting a study on how the 100 members of the U.S. Senate are all related to one another, and so far, his findings on Obama's senator relatives are pretty shocking.

It's well known in genealogy, the study of family history and pedigrees, that we, as in all humans, are related to each other. So that means you and that street vendor you buy warm nuts from occasionally, you and the hot bartender you just made out with on Friday, you and Beyoncé. A recent study found empirical evidence to support that longstanding theory by examining the genes of 2,257 people living in 40 different countries and finding shared DNA among people living in totally different parts of the world. And then there's the "six degrees of separation" theory we've all heard about.

In this context, the revelation that President Obama has 44 cousins in the Senate is not too crazy. In fact, according to that theory, we're related to President Obama too. But the Guardian's discovery is eye-opening nonetheless — not in scientific terms, but on political grounds.

Perhaps Obama's most surprising (distant) relative in the Senate is Ted Cruz. The Texas senator couldn't be more different from our president. And it's not just that he's a Republican and Obama is a Democrat. Cruz has very unabashedly fought against Obamacare; Obama signed his namesake statute into law. While Obama is known for his down-to-earth encounters with everyday Americans, Cruz has built a reputation for being flashy, including that time he posted a misguided selfie with a tiger rug (the tiger is an endangered animal).

But according to Jacobs' research, Obama and Cruz are family. Cruz's wife, Heidi Suzanne Cruz, is Obama's 14th cousin, once removed. OK, so they didn't grow up going to the same BBQs, but the findings still make them family.

Seems like many of Obama's cousins in the Senate are Republican; Jacobs' data also lists Pat Roberts and Jeff Flake as his kin. Roberts, who is Obama's 13th cousin, four times removed, is the incumbent senator from Kansas who just won the Republican primary for U.S. Senate in Kansas over a Tea Party challenger, Milton Wolf, who is also Obama's cousin. Wolf had once called Obama "the worst president in our lifetime" on CNN, throwing in that old saying, "you cannot choose your family."

As for Flake, the junior senator from Arizona, he didn't have kind words either for his eighth cousin, three times removed. Flake was critical of the president's border crisis plan, for which Obama requested $3.7 billion from Congress. Flake told Phoenix's KTAR:

My concern is that about about half of the money — actually the immigration-related funds, far more than half of the money — simply goes to HHS [Health and Human Services]. That's not to secure the border or to expedite deportation.... What we really need to do is stem this tide.... And I don't see anything in (the president's) proposal that will really do that.

Jacobs and his team's genealogy project is still a work in progress, but he hopes to be able to finalize the relations between all 100 senators in the next few months. We're curious to see what other surprising connections the researchers can make. But just judging by Obama's relatives, we're pretty sure we'd avoid a Senate family Thanksgiving.