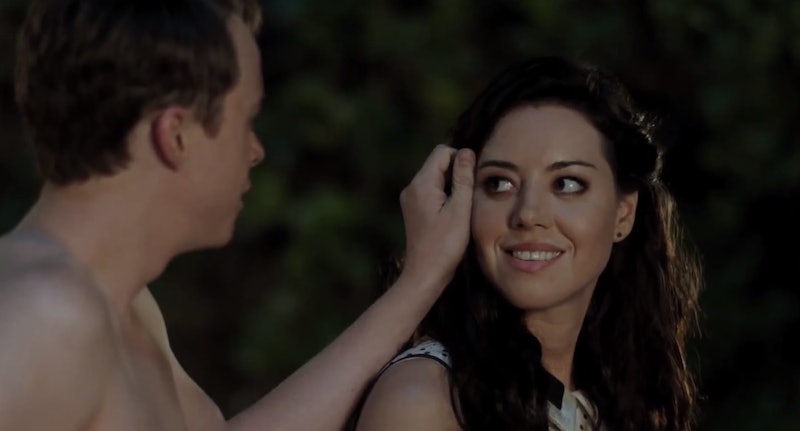 Back around 2010, when Funny People and Scott Pilgrim Vs. The World had hit theaters and Parks and Recreation was picking up steam, Aubrey Plaza had already solidified her "brand:" She was deadpan, she was snarky, she was a little weird, and she was having none of your shit. With Life After Beth , though, Plaza plays a zombie girl navigating what it means to be the undead — and in the process, she might finally be stepping out of the comfort zone Hollywood's placed her in.

Life After Beth, which premiered at Sundance this year and hits theaters Aug 15, follows Plaza's Beth and Beth's boyfriend Zach (Kill Your Darlings' Dane DeHaan) after Beth comes back from the dead. Beth bears none of the markings of her most famous character, April Ludgate — and more than that, she's a literal zombie, though with a lot of human girl mixed in. It's a performance that allows Plaza to stretch her muscles both slapstick and emotional.

At a press event at the London Hotel in West Hollywood Thursday, writer/director (and Plaza's longtime boyfriend) Jeff Baena spoke to Plaza's performance:

Aubrey's an amazing actress, and she can simultaneously be hysterical and poignant. She obviously has a career so far of being deadpan and funny, which I think pigeonholes her — she is entirely capable of the entire gamut of acting. If you've seen Safety Not Guaranteed or About Alex that's about to come out, she's not just a deadpan comedian, she's an actress, she's a real actress and she's amazingly talented. So in terms of the physical stuff that is easy for her, she can automatically always be funny physically, and she loves silly stuff. But at the same time I think what she showed in this movie is she can be a really poignant, amazing actress — and then devolve into a flesh-eating monster without skipping a beat.

Plaza hasn't always played deadpan before this, of course: Her Safety Not Guaranteed character was nicely layered, and The To Do List's Brandy Klark was downright earnest. But Life After Beth takes Plaza through a whole new journey — and hopefully it's one Hollywood will recognize and learn from.

More like this
Twitter Is At Odds Over Taylor Swift’s Possible ‘All Too Well’ Oscar Run
By Brad Witter
Revisit 1992’s 'A League Of Their Own Cast' Photos After The New TV Series
By Grace Wehniainen
What Is Ben Affleck's Net Worth? At 50, The Oscar Winner Makes 8 Figures Per Film
By Meg Walters
Ezra Miller Apologises To Everyone "Alarmed & Upset" By Their Behaviour
By Sophie McEvoy
Get Even More From Bustle — Sign Up For The Newsletter