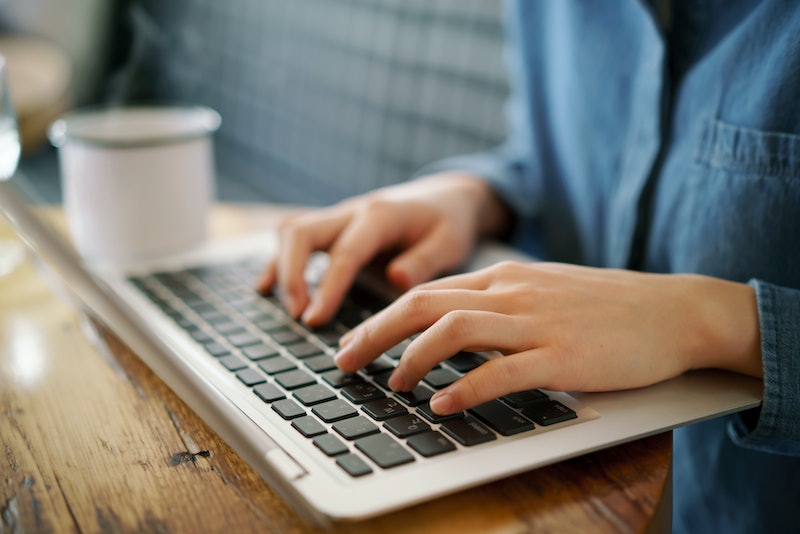 I’ve been submitting my poetry to literary magazines for about two years straight, so I’m pretty well-versed (pun totally intended) with a lot of digital publications. An ever-expanding landscape of online venues for lit has made writers’ creative and nonfiction work way more accessible and available — and that's good news for us writers and readers.

It’s super-cool that you don’t have to subscribe and pay for a monthly or yearly journal in order to catch up on some poetry and fiction (in fact, most of the time with online journals and magazines, you don't have to pay at ALL). You don’t have to make room on your already crowded bookshelf for an anthology the size of your printer. Online journals give you the opportunity to browse through hundreds of poems, stories, and essays, and all you need is WiFi; plus, you’re exposed to more new writers (like me, yay).

Since a new online lit mag is born pretty much every day, here is a guide to some of the coolest, boldest, and gutsiest sites. These online journals showcase new poetry, fiction, essays, and more. If you’re feeling super-inspired, submit to them!

PANK, which is run by Roxane Gay and M. Bartley Seigal, is one of the coolest, most carefully curated magazines that makes sure to feature new writers and experimental poetry and prose. Each month, PANK publishes around 10-12 poems and stories, each one destined to completely annihilate your soul. In a good way, obviously.

This website publishes about 10-15 poets twice a year. Poems are chosen wisely, representing the most “refreshing, shiniest” poetry there is. I love Jellyfish Magazine because I know I can always expect poems that are never, ever stale or overplayed.

Little Fiction began in 2011, when editor and founder Troy Palmer felt that short stories and the digital age were good for each other. Stories that are featured come in list-form and short-short-form, and you can download all of these stories on to your tablet or smartphone. Big Truths was born when writer Amanda Leduc suggested Palmer open up a platform for nonfiction writers.

The ideology behind Rattle is that too many people believe poetry is a snobby art, so a new community of poets must exist to basically eradicate those notions. It’s true. Back before I first read Crush by Richard Siken, I thought poetry was stuffy and esoteric. Rattle publishes a poem a day, and the poems they choose are always original and inspired. New poets are published, but so are U.S. poet laureates, so there’s always a variety of writers.

The Rumpus is home to columns like Dear Sugar, The Last Book I Loved, Funny Women, personal essays, reviews, interviews, and more. If you want quality conversation about books and pop culture, have a read. Not all essays are literature-centric; in fact, The Rumpus discusses comics, movies, music, sex, and art.

Bodega, which is self-described as “your literary corner store,” features poetry, prose, and interviews. Bodega tends to publish emerging poets and fiction writers, so it’s an awesome place to discover writers before they get big.

Muzzle has a new issues about 2-3 times a year, publishing new and established poets. Their goal is to introduce us to writers from all kinds of cultural backgrounds, genders, races, and sexual orientations. Sometimes their issues even have themes. About a year ago, they released The Sex Issue, which solely showcased sexy poems. It was pretty hot.

McSweeney’s, which is Dave Eggers' press and publishing company/kingdom, has given the world anthologies, art, and film with an off-beat, weird, and lovable edge. McSweeney’s Internet Tendency is the sweet digital version, featuring columns like Hungover Bear and Friends, and Best Joke Ever. Personal essays and interviews dominate this site, giving you a chance to read something hilarious and possible bizarre, like “I Produce Sex-Drenched Uptempo Club Bangers to Inspire Moms at 6 AM Boot Camp Classes.”

Twelve Stories, which pretty much looks like the average tumblr, is actually a collection of short stories. 12 stories, if you want exact numbers. Twelve Stories publish on an irregular, rather, organic basis, but when they do, expect super-quality writing.

Brooklyn Quarterly, which describes itself as a “haven for creative writing” is an online magazine that presents a variety of texts, including interviews, poetry, and essays. Delicately sewn together, Brooklyn Quarterly paints a stunning image of American life as a whole, as well as its intricacies.

Founded in 2003 at the University of Chicago, Contrary has grown into a beautiful, mature online magazine grownup. It made to the Writer’s Digest list of 50 Best Online Literary Magazines (as well as other Very Important Lists). Publishing poetry, fiction, and commentary, Contrary is filled to the brim with amazing work from all over the place.

Get reading... and maybe even writing!