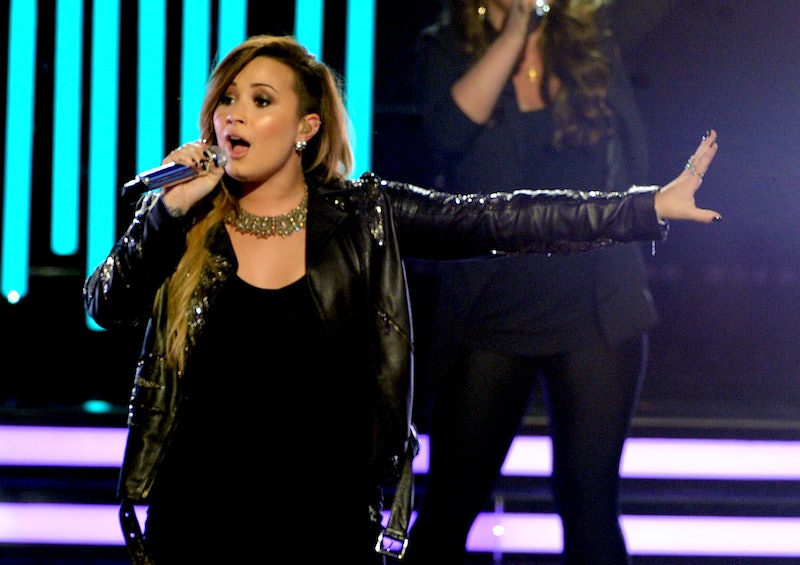 When it comes to celeb couples, there are the ones you know are together for certain (Angelina Jolie and Brad Pitt) and the ones who you aren't so sure about (Beyoncé and Jay Z — OH DEAR GAWD JUST TELL US WHAT'S UP ALREADY!!). Then there are the ones that cause you some confusion. For instance, Demi Lovato and Wilmer Valderrama. Are they together? Did they split up? Were they ever actually dating in the first place? We need to know what's going on with this familiar That 70s Show face and the girl we used to confuse with Selena Gomez! (Sorry, Demi. I know you're so much more than that now.)

Well, good news for Dilmer fans (they're called Dilmer, yes?), it appears that Lovato and Valderrama are together and have been for quite some time now. The two are pretty sneaky about their relationship which is surprising considering how active they are on social media on their own. Both Lovato and Valderrama tweet and post photos to Instagram all the time, but you'll have a hard time finding a picture showing both of them together. And really, isn't posting photos of your boo on Instagram the true testament of a solid relationship?

According to a Radar Online report from Aug. 7, a source close to Lovato says, "Demi and Wilmer are not broken up. They are still a couple and very much in love." Well, that's straightforward. As for more concrete evidence, Lovato and Valderrama attended a UFC fight together on July 5, and Lovato featured Valderrama in her music video for "Really Don't Care" which premiered in June.

Things aren't always clear with this couple, so to help out any Loverrama (yes, I like this name better!) fans out there, here's a rundown of everything you need to know.

Are Lovato and Valderrama still together?

It seems so, yes.

How long have they been together?

According to Radar Online, four years.

Four years?! Didn't they split up for a little?

It sounds like that's the case. Valderrama spoke with Perez Hilton in 2012 and said of his then-ex, "We were really just best friends and to be honest I couldn’t be more proud of her. She’s a great human being. I was very proud to be there for her when she needed me and she was there for me a number of times too."

But they're definitely back together now, right?

You'd have to ask them to be sure, but they are hanging out with each other and that video seemed to give it away, too.

Yes! Check this out!

How did they meet?

Are they happy together?

Do these smoldering half-smiles answer your question? The couple that poses flawlessly together, stays together.

More like this
At 28, Emma Thompson Was Already A Star — But Unhappy In Love, Actually
By Olivia-Anne Cleary
Paapa Essiedu Likes To Keep His Relationship Pretty Private
By Maxine Harrison
Khloé Kardashian Is Reportedly Dating A Private Equity Investor She Met Through Kim
By Jordyn Tilchen
Who Is Betty Who Dating? The Australian Singer Is Married To Her Tour Photographer
By Radhika Menon
Get Even More From Bustle — Sign Up For The Newsletter