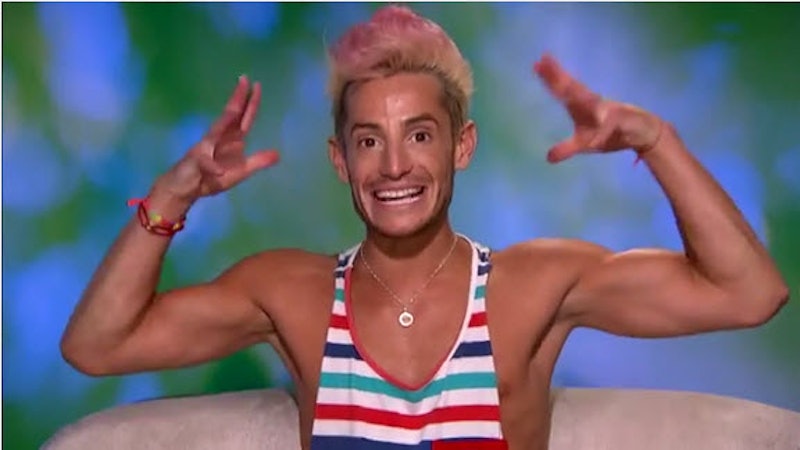 Well, the cat is officially out of the bag. Earlier Friday, Big Brother houseguest Frankie made some of the houseguests aware that he had a huge surprise to tell them about his life outside of the house. In case you aren't aware of what that is referring to, Frankie Grande was getting ready to announce that he is Ariana Grande's brother. This was a huge moment for him, and a lot of the viewers at home because it is something we've waited for the entire summer — and the time is now. I had a lot of questions regarding how he was going to reveal it. Was he going to call a house meeting and tell everyone at once? Maybe he would perform a musical number to really get the people going, and announce it after the standing O. Either way, I could not wait for the houseguests to be let in on the secret that America has known all summer long.

Frankie wanted to wait until after the nominated houseguests (Caleb, Frankie, Zach, and Donny) played the Battle of the Block, but eventually, Frankie decided it was time for the houseguests to know. It started out as a public announcement in the living room, but Frankie then decided to make it a little more personal and pulled Caleb, Cody, Derrick, and his former BFF Zach, into the Fire Room for his mega announcement. At first, the guys seemed really confused (Zach was just pissed he had to be in the same room as Frankie), but before they knew it, they had complete clarity as to what was going on. And Frankie, well he has one less problem now that he told the remaining houseguests about his real identity.

First, Frankie started with announcing he was more than just a Broadway performer and that his sister was a famous pop star.

He continued to explain that he had 1.5 million total followers, across all social media platforms, coming inside the house. Then the real bomb dropped.

Cody's reaction was priceless. He just started laughing his ass off, in Frankie's face, completely stunned by the news. Frankie explains to them why he is deciding to tell them now, versus keeping it inside like he had initially planned to do.

They were stunned. It was a top moment in the season thus far. Donny stole the show (as he always does), when he walked in on the reveal and Frankie said he was a YouTuber and social media celebrity, and Donny says, "Oh cool." Oh. Cool. No Donny, you are cool. Period.

Frankie exposed all of his lies and copped to all of the sh*t he stirred up during the double eviction week. He told the guys that they were the ones he wanted to work with for the rest of the game. Then he decided to go and tell the women of the house. That reveal went a little more "OMG, I love her!"

He even gave Ariana's new album, My Everything, a shout out.

Each houseguest reacted differently. Derrick had some questions.

Nicole was upset that she had nominated Ariana Grande's brother.

Victoria, who is a huge Ariana fan, had a surprisingly rational view on it.

Caleb wanted to use Frankie for getting "in the studio with Justin Bieber."

It will be interesting to see what the Grande Effect (as Derrick has dubbed it) has on the house.