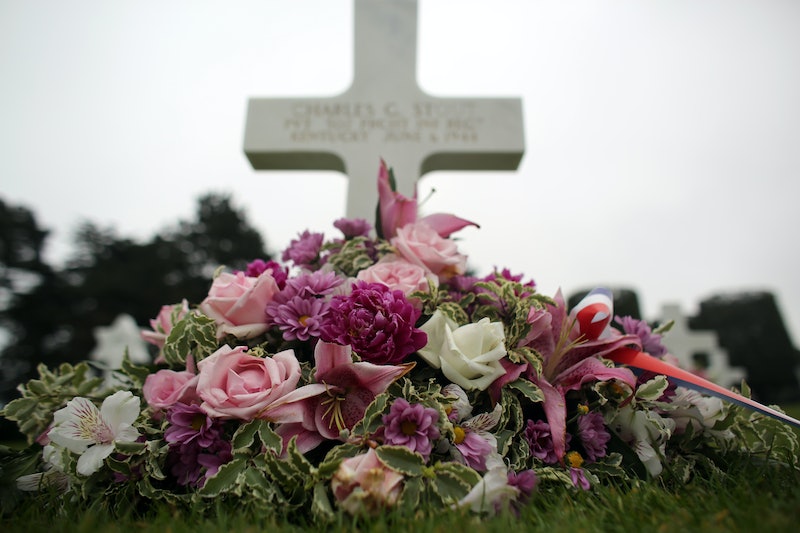 In super depressing news, it seems that a church is Tampa has refused to performs a funeral for someone after leaning that the deceased was gay. After Julion Evans died at the age of 42 from a rare disease called amyloidosis, his family arranged for his funeral service to be held at the New Hope Missionary Baptist Church, where many were members. However, after reading Evans's obituary, which stated that he was survived by his husband Kendall Capers, Pastor T.W. Jenkins cancelled on the family the day before the funeral because he felt that performing the funeral would be "blasphemous."

"I try not to condemn anyone's lifestyle, but I am a man of God and have to stand upon my principles," Jenkins told local news station KCCI.

Even putting the politics of gay marriage aside, though, backing out of performing a funeral the day before, and leaving a grieving family to scramble to find a new pastor is seriously just awful, especially since it doesn't seem Jenkins gave them any help or advice on finding a replacement. I mean seriously, these people just lost a loved one, and you're not going to offer any help?

Ultimately the family was able to have the funeral at the same funeral parlor where they held the wake, and reported that it wound up being a lovely service. But the response from the New Hope Church still hurt deeply.

“It was devastating,” Evans' mother, Julie Atwood, said. “I did feel like he was being denied the dignity of death.” She also has decided to attend another church.

Evans' husband, Kendall Capers, said, "Regardless of our background, our sexual orientation, how can you wait that long and put someone in a bind when they're going through a loss?" Capers and Evans were together for 17 years and recently got married in Maryland.

Obviously, this whole thing sucks, especially since it takes opposition to gay marriage and gay people way, way farther than it needs to. It's one thing to say you believe homosexuality is a sin, it's a whole different thing to say that you believe gay people shouldn't have funerals. As far as I'm aware, nothing in the Bible says that men of god aren't supposed to perform funerals for people they think were sinful. By saying that Evans' sexual orientation disqualifies him from having a funeral, Pastor Jenkins is essentially saying he isn't even a person.

One always hopes that no matter what a person's politics, when it dealing with real, live human beings standing in front of them, that people will set politics aside and just treat all people with dignity and compassion. But apparently, that isn't the way the world works sometimes, and instead some people, even religious leaders, let politics trump their humanity.

More like this
Charlene White & MPs Lead Tributes For Bristol Bus Boycott Organiser Roy Hackett
By Sam Ramsden
Your Daily Horoscope August 11, 2022
By Mecca Woods
How To Use Instagram Story Highlights So Everyone Sees Your Fave Stories
By Brandi Neal and Emma Carey
How To Change Your Twitter Handle
By Emma Carey
Get Even More From Bustle — Sign Up For The Newsletter