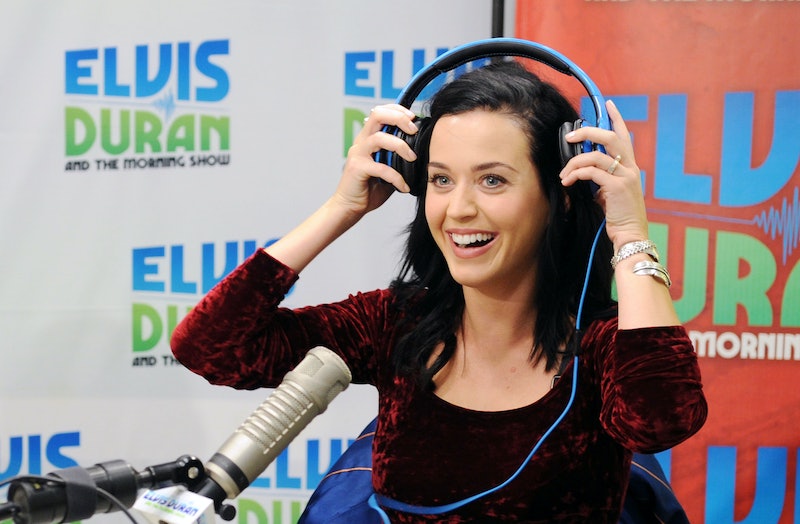 On Monday, we broached allegations that Katy Perry's new single, Roar , is almost a direct knock-off of Sara Bareilles' recent (somewhat less of a) hit, Brave. An accusation of plagiarism is always shocking and controversial, but this one becomes a little less surprising when you consider Perry's penchant for following trends. Just see her new, emoji-happy video for Roar — but let's back up for a minute.

Once upon a time, Perry was a Christian rock artist named Katy Hudson. Her expert marketing team has done a top-notch job of keeping her past out of public interest, but her first studio album sounded something like this, and she still has a "Jesus" tattoo on the inside of her wrist to show for it. We're guessing the gospel scene didn't sit very well with her, because it led to an almost-copyright infringement with I Kissed A Girl.

In 1995, Jill Sobule (who most of us only know for her awesome song on the Clueless soundtrack) released a track called "I Kissed A Girl," which centered on experimentation with a girlfriend. She received little to no credit for this brilliant choice of lyrical content, but 13 years later, Hudson built an empire out of a similar track.

And, despite the similarities with Sobule's song, we totally dug Perry's empire at first. Part of the singer's original aesthetic was being a self-proclaimed tomboy. Her first pop album, One Of The Boys, led us to believe that her image would be edgy, down-to-earth, and cool. But in the five years between One Of The Boys and Teenage Dream, Lady Gaga became unbeatable competition for every pop artist in the industry. Perry's solution to America's insatiable hunger for weird pop acts that edge on performance art? Whipped cream-shooting bras, duh. Forget being a tomboy — Perry became all about sugary-sweet girl culture. We could easily label it reinvention, but it was a disappointing reinvention nonetheless.

To fully step up to the level of Gaga competition, though, Perry needed to build an emotionally and financially committed fan base. "Little Monsters," meet the "KatyCats": a group of teenage girls inspired by the song Firework and eager to brand themselves. (Speaking of KatyCats, we'll point out that Perry's chosen spirit animal became part of her image just as cats became the most popular things on the Internet. But the singer does get major points for naming her cat Kitty Purry, because that's just adorable.)

That brings us to Katy's newest album, titled Prism. So far, the promotion for Prism has consisted of several announcements that Perry's changing her image again. To be released in perfect tandem with Lady Gaga's own new album and subsequent image revision (her promotional scheme has included such mysterious bait as an image of her sitting atop a pile of hay in an art gallery), Prism promises to be vaguely dark and totally predictable in its unpredictability.

And, finally, let's take a gander the lyric video for Roar. With its three minutes of emoji-heavy texting, the video looks a lot like this emoji-mix of N****s In Paris , made by Aziz Ansari.

Granted, all musicians are inspired by their contemporaries, so there's little surprise Perry is taking a page from some of today's undoubtedly inspiring music acts. And let's give credit where credit's due: Perry has been able to transform that inspiration into an extremely successful career full of contagious pop hits. Still, we do find ourselves wishing that Perry would do us a favor and drop the act. We are 85 percent sure we'd love her for whoever she really is.