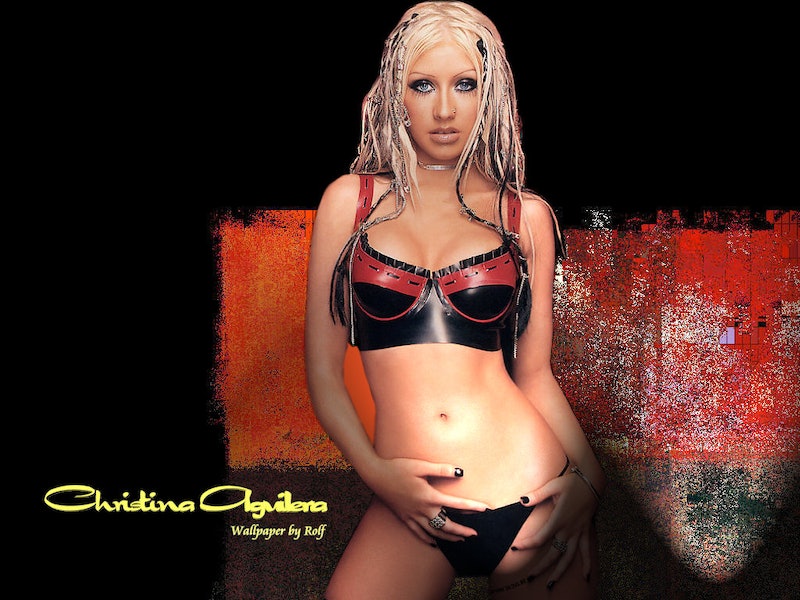 As a 12-year-old, I usually spent Friday nights fussing in front of my mother’s floor-length mirror, making sure my thong straps were peeking artfully above the waistband of my Kohl's flared stretch jeans. OK, so, technically, it wasn’t really a thong. It was actually a pair of too-small bikini underwear from Limited Too, hacked with a pair of kitchen scissors to slide delicately between my buns so I could look like the classy grown-up lady I was.

The year was 2003, and I was preparing to debut my whale tail to the world at one of the nearby Catholic school’s infamous middle school dances. I went to a different Catholic school nearby, but this school’s dances were notoriously the best. There was absolutely no adult supervision whatsoever, it was rumored, and even if there was, no one had ever seen anyone intervene with the bumping and grinding. There were going to be lots of boys, and I wanted to be sexy enough to attract at least one of them. I wasn't a little girl anymore, and it was time the world got the memo.

I was, and still am, an awkward fat girl who will never look quite right in hip-huggers — assless or otherwise.

Eleven years later, I am now fully aware of how disturbing the idea of a sexy 12-year-old is, but in my mind back then, it wasn’t just a fad or an aesthetic choice, it was a requirement. A DIY thong was but a necessary accoutrement.

Christina Aguilera's “Dirrty,” was on the radio. Christina, appearing first in assless chaps and then in a laughably micro miniskirt, gyrates in a boxing ring which seems to be housed in an abandoned warehouse full of shirtless, glistening men. She is adored by all the men around her, an object with power. Surely, I thought, there could be nothing better.

I would later learn these men were paid to pretend to be interested, and were maybe even gay. But to my preteen self, there was nothing realer than what I was watching on MTV. Britney Spears and Christina Aguilera were what I was supposed to look like: skinny and blonde, with curves in all the right places.

As an overweight mixed race girl with frizzy black hair, glasses, and not much in the boob department, the ideals they peddled seemed unattainable. But I refused to give up. If I got those straps to peek over my size 16 stretch pants in just the right way, I would be a little bit closer to sexiness, which, of course, equaled godliness.

But that Catholic school dance didn't go so well for me. A gaggle of boys (dressed to impress in oversized t-shirts and sagging jean shorts) made snide comments and pushed each other towards me, daring one another to take on the horrifying task of dancing with me. I relegated myself to a wall close to the snack table, where embarrassment roiled in my guts for the next two hours until my friend’s mom picked us up.

The feeling of being against that wall has never quite left me. As I got older and sex became more tangible with every passing year, I struggled to find ways to feel attractive. I was, and still am, an awkward fat girl who will never look quite right in hip-huggers — assless or otherwise.

My inner demons, Christina and Britney, followed me throughout high school. When I tried to get dressed in the morning, they high-fived behind my head as I broke down crying in front of the mirror.

The physical inadequacy I felt was pervasive. It seeped into every relationship I had, despite multiple assurances from partners that I was not the disgusting creature I had made myself out to be. Why was I not also chosen to be pretty?

After years of putting myself down and comparing myself to all sorts of women, I moved away to college. It was there I learned about feminism. I discovered that our sexualized culture does have harmful drawbacks, and that every insecurity I was experiencing was, sadly, normal for women of all ages.

I learned about how our patriarchal society has set up a very clear definition of who is and isn't allowed to feel sexy, and that I wasn’t the only one who felt excluded from that definition.

While college was a time of immense healing, even now at 23, I can’t say that I’ve fully recovered. Though body image activism has made leaps and bounds in recent years, for every model out there who looks like the rest of us, there are still hundreds of photo-shopped creations that teach women and girls every day they are simply not good enough.

If I could go back and chat with that twelve-year-old in front of the floor-length mirror, I’d tell her that the thing to learn from Christina and Britney — if anything — is that female sexuality can sometimes be used as a powerful tool. The only difference is that any and every woman can harness that power. You don’t have to wrestle an anaconda in assless chaps to do it. You can simply be you — DIY thong not required.

More like this
20 Christmas Movie Quotes That'll Get You In The Holiday Spirit
By Alexis Morillo
35 Genius Secret Santa Gifts For Someone You Don’t Know Very Well
By Rebecca Deczynski and Lauren Grant
Bustle Daily Newsletter: December 5, 2022
By Hayley Schueneman
Designers Say If Your Home Doesn't Have Any Of These Things, It Looks Outdated
By Claire Epting
Get Even More From Bustle — Sign Up For The Newsletter