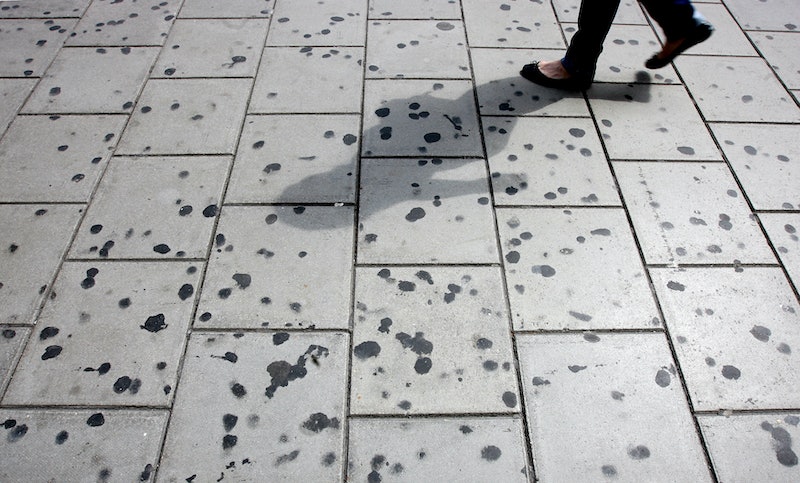 There are a lot people out there who seem to think street harassment is a compliment, but in reality, acting as though a woman in public is automatically nothing more than a display to comment upon is offensive and rude. Because a woman out trying to live her life doesn't deserve to be shouted at. And having guys constantly shouting things isn't fun, but rather a constant reminder that as a woman, people don't see you as person, someone with boundaries to be respected.

Plus, most of the comments are just plain gross. And to highlight that fact, Huffington Post Women recently started a hashtag, #ThatsWhatHeSaid, aimed at drawing attention to the unacceptable things men shout at women on the street. Because anyone who thinks street harassment is a compliment has never had anyone shout "Nice tits!" at them while they were just minding their own business.

Huffington Post Women's original piece launching #ThatsWhatHeSaid used images of women holding signs with quotes from their street harassers. They asked women to use the hashtag to tweet pictures of themselves holding similar signs, though most women chose instead to simply tweet the quotes as text. After all, putting your face on the Internet can be a scary experience sometimes, especially while holding an easily photoshopped sign. But the message of the hashtag comes through loud and clear regardless.

Still, some people weren't thrilled with the #ThatsWhatHeSaid hashtag, even apart from the usual trolls. Some felt that the tag was either a rip off of (or just drawing attention away from) #YouOKSis, another street harassment tag that primarily focused on black women, a group much more likely to experience street harassment and to have verbal harassment escalate into assault.

The inspiration behind #YouOKSis, social worker and activist Feminista Jones, told Bustle in an email that she didn't feel #ThatsWhatHeSaid was stealing from #YouOKSis, but that she still found the hashtag somewhat frustrating. Although she says that, "any effort to bring awareness to street harassment is a step in the right direction," problems begin to arise when "the representation of victims lacks diversity not only in race, class, or gender identity but also in experiences."

"Black women have been calling out [street harassment] for decades, yet our faces are all but erased from major campaigns," she says. And it's certainly true that #ThatsWhatHeSaid seems most popular among white women, and some (though not most) tweets do play into racist tropes about black men threatening white women, including the original Huffington Post article, which includes a sign that reads simply "Hey Snowbunny."

Feminista Jones also points out that the #ThatsWhatHeSaid hashtag doesn't really provide a space "to talk about solutions." Which is obviously what we should all be hoping to find. Because clearly this problem needs to start getting better soon.

More like this
Iran Has Issued A Death Sentence Over Mahsa Amini Protests
By Catharina Cheung, Darshita Goyal and Maxine Harrison
10 Thanksgiving Alternatives You Can Celebrate This Month
By Katie Mitchell
Here’s How To Turn On Instagram Post Notifications
By Megan Grant and Alexis Morillo
Here’s How To Find Your Apple Music Replay For 2022
By Melanie Mignucci
Get Even More From Bustle — Sign Up For The Newsletter