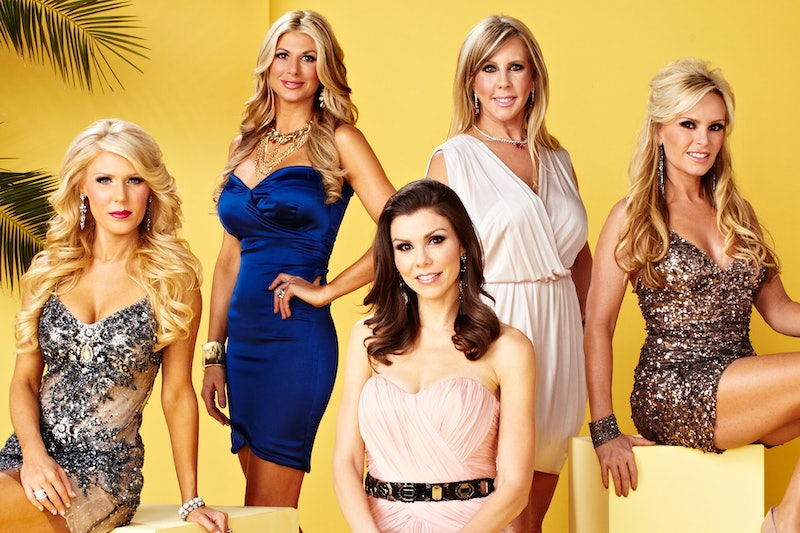 The latest iteration of the Real Housewives of Orange County just ended, so you know what that means -- catty, ridiculous check-ins on all the season's "plots," fueled by alcohol and plastic surgery! And taking place over three separate nights and hours! That's right, it's the three-part reunion special and oh boy do these women truly hate each other.

Then again, the "drama" is never what you want it to be, right? Commercials suggest blow-up fights that might theoretically end with someone's extensions in a vice-grip, but that rarely happens. Instead we're treated to reheated spats from various points in the season, maybe earlier seasons if this was a particularly blah one, all presided over by the (admittedly engaging) Andy Cohen. It's a microwaved meal, even if throwing plastic in there might not be advisable.

Myself, I haven't seen an episode of this franchise (to say nothing of the OC series) since the first season of New Jersey four or five years ago. An eon in reality time! I was worried I'd somehow be lost watching tonight's reunion, like I didn't know enough to write about five blonde women arguing about brunch etiquette. The good news, for me and the nation -- nothing appears to have changed. Housewives are housewives no matter the geography or year. And there are some defining characteristics of the species!

You might be a Real Housewi[fe] of Orange County if...

...You blast one of the other housewives on your blog

At one point I tried to keep track of the number of references made to the Housewives' respective Bravo-hosted blogs, but you quickly realize it's just an astronomical figure. You're talking "guess the number of jelly beans" here. Each housewife has her own blog, used primarily to talk about what a bitch your best friend is. I'm sure you could engage there with some issue of personal relevance -- maybe business? Everyone on this show's a "businesswoman" -- but, like, Heather's totally lying about cheating on her husband. If she didn't want to be put on blast, she should never have hired that hot caterer in the first place.

We know Lydia's the "quirky" one because she wears a princess headband and tells us she's quirky. But did you also know that she and her husband operate one of SoCal's 300 unique lifestyle magazines, the name of which escapes me/whatever? And denied fellow Housewife Heather's request to appear on the cover? None of the words in this paragraph come anywhere close to describing the lives of normal people.

…You think you're a secret genius

Probably, but wasn't it supposed to be a secret? Why are you telling us on national television?!

...Any small child might mistake you for a Muppet or Disney villain

I feel it's fair game with the Housewives franchise to call some of these women out on horrendous plastic surgery jobs. And by some of these women, I mean all of these women. And by the most egregious of these surgeries, I mean Vicki -- holy hell. We could launch into an extended discussion of the beauty pressures faced by modern women or we could just move on, because this is ALL TOO MUCH.

…You compare substance addiction to cancer

Lauri's ne'er-do-well son is now the father to a baby girl, but before that he battled substance abuse which attacked him "like cancer." Cool comparison!

…You are a pillar of the community

It's a good thing this so-called community, which I'm guessing means Orange County at large, can be supported by so many pillars. Because every one of the Housewives is one of those pillars. "Business" is a favorite pillar, followed closely by "charity" then maybe "social events." The way these ladies describe themselves as pillars you'd think they were re-enacting some version of "I am Spartacus!" The solidarity is just astonishing.

Look in their eyes, buried underneath colored contact lenses and stray bits of mascara. Do you see it? That's the truth, and it corrects whatever the mouth happens to have just vomited out.

...You hate your friends so, so, so much

Until a week before next season, when you reconsider all the hate in your heart and ask yourself if forgiveness and patience aren't things we wish we'd bestow more readily. Then backslide WAY worse than even the season before would have predicted possible.

How many did you tally? If you answered "yes" to more than four, then congratulations -- you are at least a viable candidate for the show, and possibly on Real Housewives already! But if you scored just one, there's no need to panic either! You are still a walking piece of shit!

More like this
Everything To Know About 'RHONJ' Season 13
By Brad Witter
‘RHOBH’ Newcomer Sheree Zampino Is Still Close To Ex-Husband Will Smith
By Brad Witter
Kourtney Kardashian & Travis Barker Are Married – Officially
By Sophie McEvoy
Sam Ryder Is Ignoring The Eurovision Hype, Too
By El Hunt
Get Even More From Bustle — Sign Up For The Newsletter