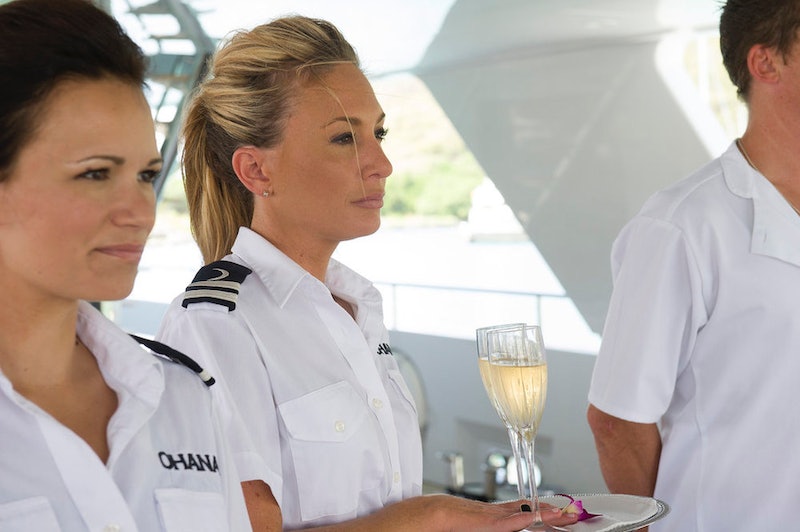 A new season usually brings some new faces to your favorite TV show. Sometimes, we have the "out with the old, in with the new" feeling. Other times, it's "this show was so good when she was on it." In the case of Below Deck 's Kate Chastain, who is replacing Adrienne Gang from Season 1, my feelings definitely lie with the former.

Chastain is the new chief steward on Below Deck this season, which is a role we first saw Gang undertake in Season 1. During the first season of Below Deck, basically no one liked Gang. She relished the power she had leading the stewards whose job it is to pretty much cater to the guests' every whim, no matter how outrageous it seemed. However, her micro-managing of crew member Sam Orme and her choice to not come to the defense of Kat Held when one guest sexually harassed her, among other things, made Gang the villain on the yacht. I felt bad that some of the crew members didn't respect Gang's authority, but she also didn't respect her team, so she kind of had it coming.

That's why Gang will surely not be missed this season and Chastain is a welcome addition to the Below Deck crew. Though Chastain is one of the newbies this season who immediately gets attention for her good looks, she brings a wealth of yachting experience with her, having sailed through the Caribbean, Mediterranean, and Central America during her seven-year yachting career. Previews of Below Deck show that Chastain is going to bring tons of creativity to the guests' experience on the yacht, which is not only going to be fun to watch, but it also just shows how great she is at her job. I mean, who wouldn't want to attend a "festive disco jungle" party?

However, I wouldn't say that Chastain is any better of a person than Gang was on Below Deck. In fact, Chastain may be even more evil. It looks like there's going to be a bit of a love triangle between Chastain, Held, and Ben Robinson this season. We were led to believe that Held and Robinson hooked up during Season 1 of Below Deck, but now that Chastain and Robinson are bunkmates, it's very likely there will be some hanky panky between them. Held even says that she's jealous of Chastain and Robinson's relationship because she considers Robinson her "soul mate." For Chastain, her fling with Robinson is "not about the boy; it's about winning." On one hand, that statement really makes Chastain look like a terrible person and makes me very, very sad for Held, but on the other hand it's kind of refreshing that this fight over a guy isn't actually about the guy. It's like she's leaning in. Almost.

As bad of a person Chastain seems from the little we know about her this season, at least she owns it. "I think I have a bitchy resting face, which is a real thing," says Chastain during the season. On the contrary, Gang always seemed dumbfounded that her fellow crew members didn't like her. However, it shouldn't really be a surprise that when you treat people like they're inferior to you, even if they technically are in leadership status, they don't take too kindly to it.

Unfortunately, Gang won't be completely absent from this season of Below Deck. It looks like the crew will run into her at some fabulous island beach party or something. You would think that maybe Gang watched herself on TV and would have mellowed a bit, but no. She's still causing trouble even when she's not an official member of the Below Deck crew anymore. When Held runs into her, she accuses Gang of talking badly about her behind her back, you know, the usual on reality TV.

I'm kind of not-so-secretly hoping Gang meets Chastain and they size each other up on screen, although I have a feeling these two bad-ass chicks might actually get along. Wait a minute, I take that back. No one could ever get along with Gang.