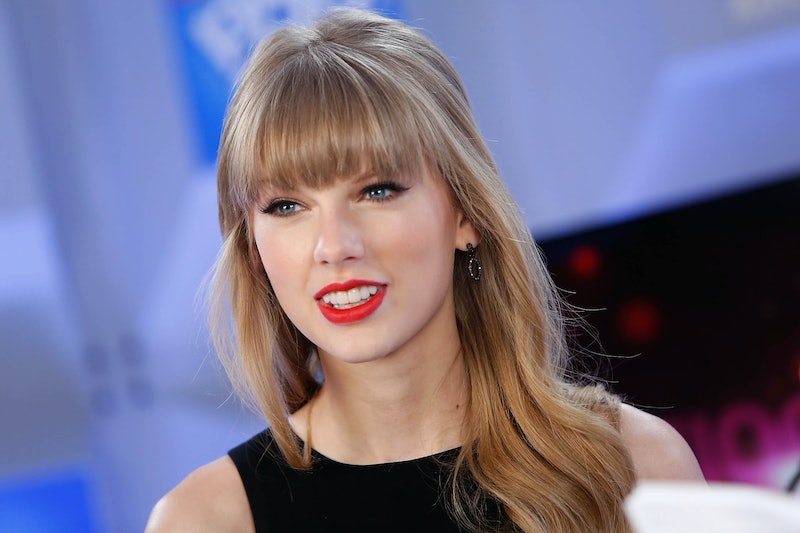 The summer of Taylor Swift continues. Heck, we're already on Volume III of her outfits (check out volumes I and II if you like adorable mini skirts and vintage-inspired ensembles. Oh, and I should add that there's an unofficial volume I.5 that's devoted entirely to rompers. Yes, rompers).

Now that she's dozens of outfits into the summer, the ridicule for her for her uncannily well-dressed (not to mention well-coiffed: she reportedly spends an hour on her outfit, hair, and makeup post-workout) trips to the gym is growing a bit louder, especially when contrasted with BFF Karlie Kloss, who actually wears normal gym gear. But let's just take it at face-value: Taylor Swift likes to get dressed up, and can you blame her? It's working — she's consistently getting herself headlines in all the top fashion publications on the weekly!

And hey, she's due for another huge publicity bump: she's rumored to be debuting a new single at the MTV Video Music Awards at the end of August. Until then, she's sure to keep traveling to and from the gym in style: so we might as well enjoy it. With that in mind, here are some of her best looks of late:

She looked like a chic J. Crew model in tangerine orange shorts paired with an artfully-rumpled button-down. And those two-tone, heeled Oxfords are to die for!

2. In A Sundress (and serious heels)

The mint green of this floaty floral looks ace with her red lipstick, and the berry toned Platform (the capital P is intentional) peep-toe pumps add another nice pop of contrast.

Quirky felt hats and heeled booties are probably my two biggest weaknesses, so I have to say this look is a win.

She got a little flack for this outfit (some found the billowy shape unflattering), but I think it's nice to see Taylor stepping out of her comfort zone, even if it's not exactly a huge fashion risk. Besides, her double barrettes are almost maddeningly adorable.

What's your favorite ensemble of the bunch? I'm partial to the colorful shorts ensemble, if only because I want to steal her shoes.