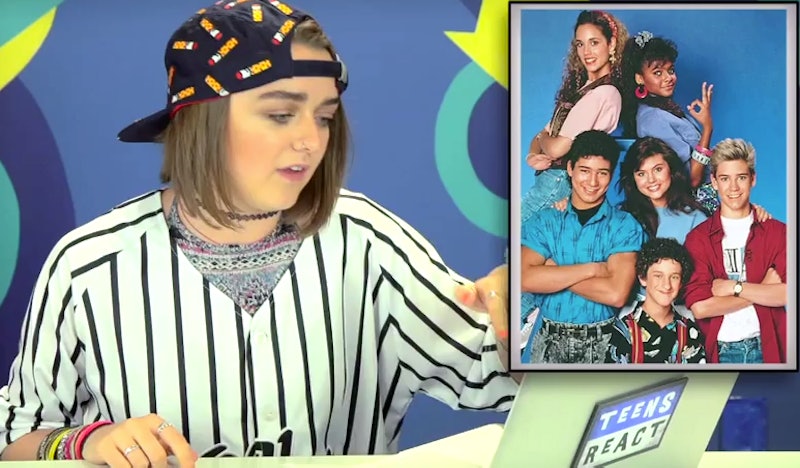 Saved By The Bell is a relic from a long lost time and believe it or not, the show is celebrating its 25th birthday this year; it premiered all the way back in 1989. You may think that everyone knows what SBTB is, but today's kids are too young to have grown up with the Saturday morning series, and aren't familiar with Zach and co. It's a bizarre thought, isn't it? There are people out there who don't get the "I'm so excited, I'm so scared" reference? What?? In this FineBros video, contemporary teens, including the one and only Maisie Williams, react to Saved By The Bell, and it's proof that yep, SBTB is now officially a thing of the past. The show is soooooo old to them!

Williams makes an excellent teen talking head for this segment and offers insight beyond what a bad perm Elizabeth Berkley had (HEY, I THINK IT'S COOL, and let's be honest — that's the hair that paved the way for her role in Showgirls) and how poor the AWESOME graphics are. Williams, for instance, thinks that modern day shows should have intros that are as joyously epic as SBTB's rollicking theme song, which makes sense, since Game of Thrones' intro is very much lacking in neon zigzags. Williams also astutely points out that the iconic SBTB fashion is coming back (ahem, that would be you, normcore), while the other teens in the video seem helplessly at odds with the world of Bayside. There are, however, a few cool teens who understand how terrific Saved by the Bell is — my guess is that they were either born with a gene for "'90s nostalgia" or have older siblings.

So, watch the segment below and prepare to feel a few things, mainly:

4. Ready to write to VH1 to do a I Love The '90s type show called I Love Teen Culture, starring Maisie Williams as the primary talking head. That girl is funny.

5. Confused about that Lifetime movie.

More like this
All The ’70s Easter Eggs You Missed In 'That ’90s Show'
By Grace Wehniainen
This 'Gossip Girl' Wardrobe Error Has Gone Viral On TikTok
By Alyssa Lapid
At 28, Debra Jo Rupp Was Living A Much Different '70s Show
By Grace Wehniainen
'Abbott Elementary' Fans Probably Missed This 'Parent Trap' Easter Egg
By Sam Ramsden
Get Even More From Bustle — Sign Up For The Newsletter
From hair trends to relationship advice, our daily newsletter has everything you need to sound like a person who’s on TikTok, even if you aren’t.