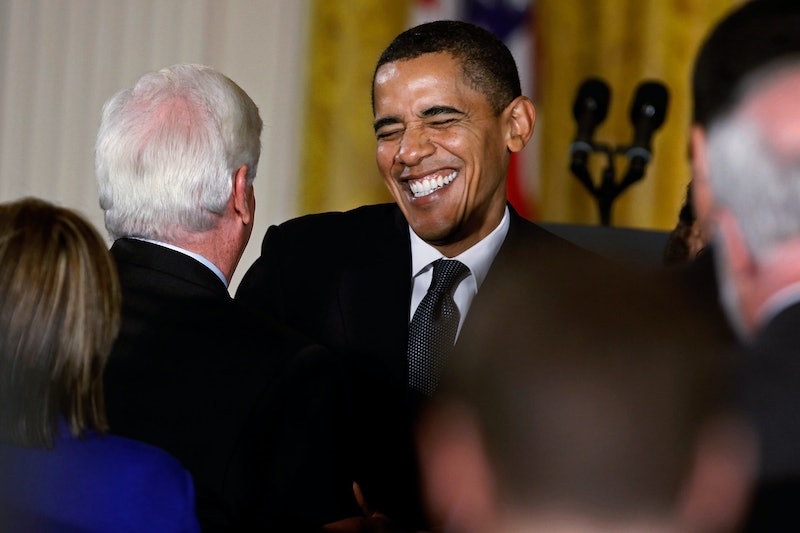 Happy Presidential Joke Day, ladies and gents! OK, for those of you who don't keep up on your incredibly random holidays, Monday is August 11th — or Presidential Joke Day! — which means Monday is when the nation celebrates the jokesters in one of its most exclusive clubs: The President's Club. On Aug. 11 in 1984, President Ronald Reagan was testing a mic and rather than your traditional "check one, check two," he tried a little standup:

My fellow Americans, I am pleased to tell you today that I've signed legislation to outlaw Russia forever. We begin bombing in five minutes.

Reagan didn't know he was being recorded, the morbid joke leaked to the public, and the holiday was born!

Since the main form of celebrating this illustrious occasion has been reflecting on presidential humor, it's only prudent that today we celebrate by finding some of our most successful — and least successful — Commander-in-Chief comics.

Of course, no list could be complete without the man whose humor created the holiday. Ronald Reagan was an actor as a young man, and his humor, stage presence, and timing clearly spilled over into his political career. The joke that birthed the holiday might've been a gaffe, but Reagan actively used his humor during his presidency and kept his lighthearted spirit though some of its darkest hours.

While vying for re-election and facing off with Vice President Walter Mondale in a Presidential Debate, President Reagan used his humor to dismiss concerns about his age — becoming President at age 69 made him the oldest president in history! — by shining the spotlight back on his competitor's age.

President Franklin Delano Roosevelt not only had to deal with his private struggle with polio, but his presidency faced enormous challenges like the Great Depression and World War II. Regardless, FDR had a great sense of humor. When First Lady Eleanor Roosevelt was visiting a penitentiary on business, and FDR was told that she was "in prison," he replied, "I'm not surprised. But what for?"

Despite facing bitter attacks from Republicans in the 1944 presidential election, FDR gave a speech in September about how he could accept attacks on himself and on his wife — but when Republicans attacked his dog Fala, that crossed the line.

Who could leave out President Obama on this one? Despite a gridlocked Congress, economic turmoil and war on multiple fronts, President Obama continually reminds the public about his ability to find the humorous side to any situation.

At the height of a series of nasty election season attacks -- like Donald Trump's prominent claim that the President was not born in the United States -- President Obama used the 2011 White House Correspondents Dinner to use jokes to deal with the nay-sayers.

Some Presidents used humor, and others had a rough time showing that comical side. President Nixon, for example, was so busy feeling attacked by the press, and keeping them out of the loop, that it was hard for him to loosen up in their presence.

President Eisenhower was a wartime hero who wanted to present an even-keeled head-of-state persona to the public, so while he had a warm smile and friendly disposition, humor was never something he attempted very actively.