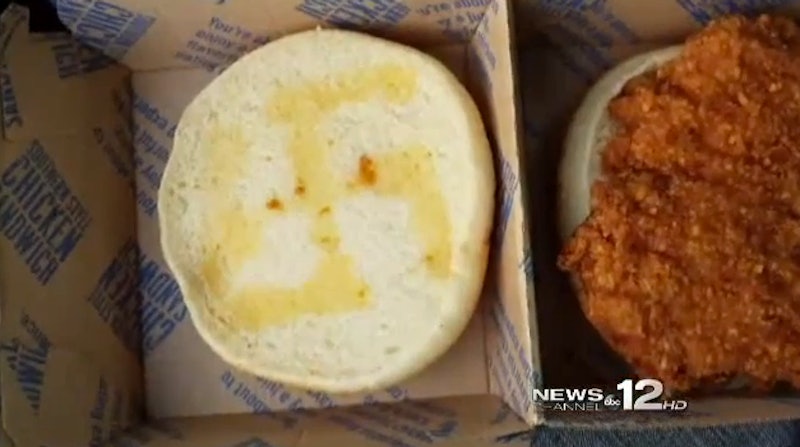 Unfortunately, there is a treasure trove of disgusting things that people have found under fast food's golden arches — but now, we may have seen the most disgusting. Yup, even more so than bugs in a Happy Meal. North Carolina resident Charleigh Matice was outraged when she apparently came across a butter swastika in her McDonald's chicken sandwich.

Matice was about to put mayonnaise on her sandwich when she noticed that a swastika was drawn onto her bun, WCTI12 reported. When she went inside, restaurant employees offered to give her a new sandwich, but Matice said she had lost her appetite and wanted her money back instead. Matice, whose grandfather fought in WWII, said that she wants the incident addressed further than just a refund.

"Maybe it needs to be part of training, or maybe brought up more often so that people know that this is not okay," Matice told WCTI12.

I'm not sure what kind of training that would entail, or even why you would need to do it. Like pretend with me for a second that someone had to expressly tell you not to put anti-Semitic symbols into people's food. Heavy sighs all around.

WCTI12, an ABC affiliate, spent several days verifying that the Nazi symbol actually appeared on the sandwich. Though they were directed to corporate for comment, Dulcy Purcell, the owner and operator of the local McD's, shot them an apologetic email.

We are very sorry for the service that our customers received, and to be clear we have terminated the employee who was involved. We do not tolerate that kind of behavior at McDonald's, and it's not what we stand for personally as owners. It is about providing the best level of service and care to our customers, and anything less than that is unacceptable to us.

Good to know that all that creepy clown make-up is actually hiding your bigotry.

Nah, I'm kidding. It was cool of the local owner to circumvent corporate communication and take quick action against the employee. And apparently Matice has forgiven them, too. She told WCTI12 that she will eat at McDonalds again, and isn't upset with the corporation as a whole.

“I'm a loyal customer and that's why I don't want people like that representing them," Matice said.

So, if you're going to do something awful as a fast food employee, try to stick to the gross rather than the offensive. Or not at all.

More like this
What To Know About Martin Bashir After Watching 'The Crown'
By Bustle UK
This Luxe Cookware Is Beloved By Celebrity Chefs — And It’s Majorly Discounted For Black Friday
By BDG Commerce
The 77 Cheapest, Most Clever Gifts On Amazon
By Rebecca Martinson
Bustle Daily Newsletter: December 2, 2022
By Hayley Schueneman
Get Even More From Bustle — Sign Up For The Newsletter