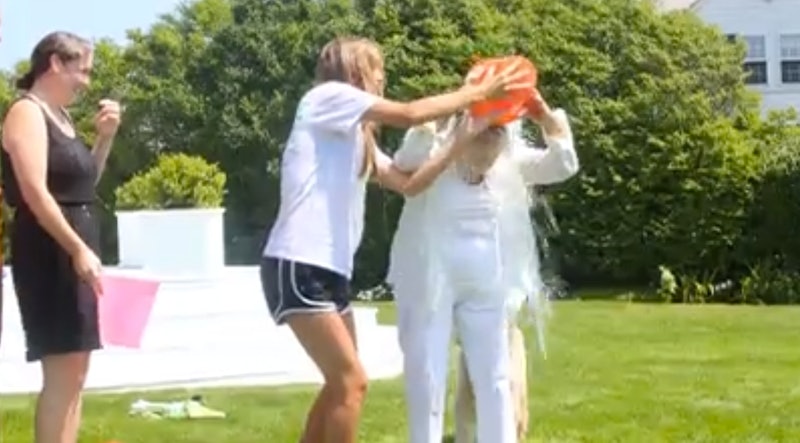 Chances are, you've already seen it done: The Ice Bucket Challenge, in which people douse themselves with a full bucket of ice water in order to raise awareness of amyotrophic lateral sclerosis (ALS), sometimes known as Lou Gehrig's Disease. It's a simple enough idea: just dump the water, give yourself a chilly jolt, and nominate your friends on social media. Now, America's most famed political family is getting in on the act — the Kennedy family took the Ice Bucket Challenge, and they want President Obama to follow suit.

In a video uploaded to Facebook Monday morning, Maxwell Kennedy, the youngest son of former New York Senator and presidential candidate Robert F. Kennedy, introduced his high-profile family's contribution to the cause — a big ol' row of Kennedys, all getting ready to tip buckets of ice water all over themselves, under the warm Martha's Vineyard sun.

One right after the other, the whole line begins to dump the water over their heads, before concluding with the family's matriarch, Ethel Kennedy — the wife of the late RFK. Before doing the deed, she issues a challenge of her own: "President Obama, I nominate you."

It's a fun video, and in spite of all the reasons an 86-year-old woman might prefer not to get doused with freezing water — seriously a shock to the system at any age — she gamely took the challenge. Your turn, President Obama. If you've got what it takes — and you wouldn't want to project weakness, would you? — it's time to get a camera, have somebody at the White House pour some ice in your super-fancy presidential beer cooler (which we all know you have somewhere), and make things right.

Whether these videos help or not, it's a particularly worthy cause. ALS is devastating. It's an incurable, and ultimately fatal neurodegenerative condition which gradually weakens and atrophies the body's muscles to the point that they cease proper function, often leading to respiratory failure. Precisely how long somebody can live with ALS differs widely from case to case, and based on the level of care they receive. The average person suffering from ALS will live about 43 months, with about 4 percent making it past ten years.

It comes as little surprise, therefore, that people are eager to help out however they can. Remember though, if you take the Ice Bucket Challenge, you'd better not chicken out.

I'm talking to you, blonde young Kennedy lady on the left side of the video.You may have thought nobody would notice you dumping your bucket on the ground instead of over your head, but you were wrong.