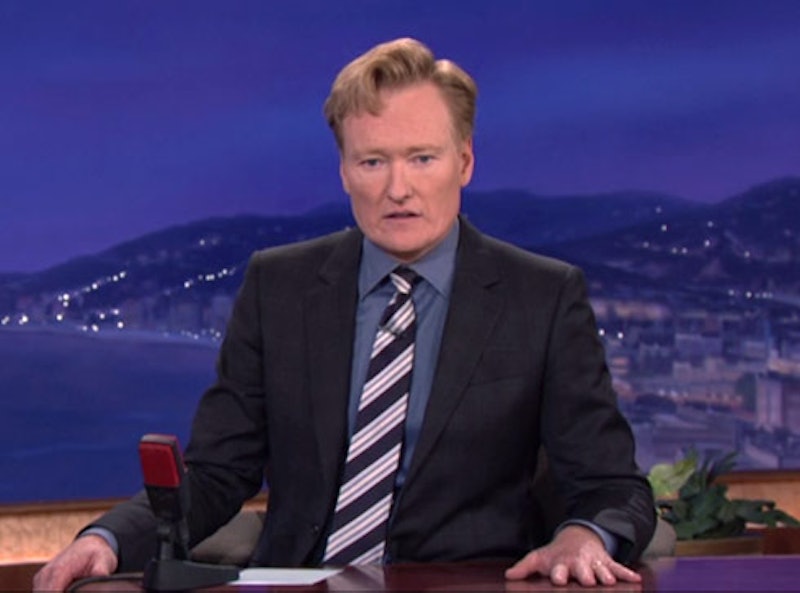 Hearing that Robin Williams has passed away is the kind of shocking, gut-wrenching news that will lead to everyone remembering exactly where they were and how they found out. Some found out from friends. Some found out from Twitter. Some found out from the news. Of the numerous celebrities who sent their tributes to Robin Williams and their condolences to his family, Conan O'Brien is possibly the one who received the news at the worst possible time. O'Brien was live filming when he heard of Williams' death and he broke the news in an emotional way that really resonates with the audience that was watching it live or watching it later.

O'Brien looked absolutely shell-shocked, his gaze lowered, his pauses frequent, and his voice shaking the slightest bit as he said, "We tape these shows a few hours early and by the time you see this now on TV, I’m sure that you’ll know [about Williams' death]. I’m sorry to anybody in our studio audience that I’m breaking this news. This is absolutely shocking and horrifying and so upsetting on every level."

Andy Richter and guest Will Arnett also took the opportunity to pay their respects to Williams with equally downcast looks on their faces. "He was an amazingly kind and generous person," said Richter. "Our thoughts go out to his family."

"He was even more fantastic [as a person]. He was just the loveliest, sweetest, one of the kindest guys that I've ever worked with. Just such a soft, warm, emotionally sweet guy and it's a major, major loss for... for everybody," said Arnett, who had to clear his throat midway through his speech likely due to the emotional duress of the moment.

The fact that O'Brien, Richter, and Arnett not only took time out of the show to put the spotlight on such an amazing actor and comedian but were also visibly choked up while doing so just goes to show exactly how many lives that Williams has touched over the years. He will be truly remembered as one of the greats. Watch the tribute below.