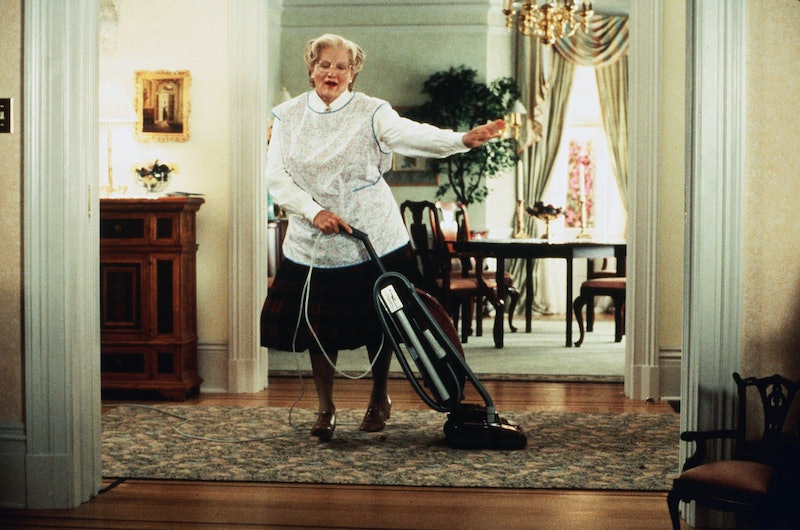 My favorite childhood actor, Robin Williams, has died. He was 63. Reports say it was a suicide.

The Oscar-winning actor was discovered at his Tiburon, CA home on Monday, Aug 11. The death was initially announced by Marin County Sheriff’s Office Coroner Division, who wrote that "the death [appears] to be a suicide due to asphyxia.” Williams had long been open about his battles with depression and alcoholism.

In the same way a baby can scan the face of a stranger and make a swift moral judgement, so too we '90s kids scanned the face of Robin Williams and decided over and over again: This guy isn't bullshit. We can trust him.

I'm not usually one for caring much about celebrity deaths. It sounds crude, but honestly, working as a news editor will do that to a person. It's not as if we know these people, right? Why do we pretend like we do? When news comes in of a celebrity death, I'm usually shocked like everyone else, but not moved. I write the headline and move on.

And yet, as I read this news on my Facebook feed Monday night, those watery blue eyes hooked me (pun intended), once again. I stared back at the picture of Robin Williams, smiling in his sad, signature way, and couldn't help feeling as though I'd lost a friend. I didn't know quite what to write, but I knew I owed him something, surely. After all, how many times had he given me that bittersweet, crinkly-eyed grin and asked for nothing in return?

It was a smile that conveyed a message I desperately needed then as much as I do now: It's OK to feel everything at once. Even when you grow up.

Because that was the main lesson Robin Williams taught us '90s kids, wasn't it? In a decade filled with supposed unending happiness, did any male actor seem to feel more rawly, more like a child, than him? Whether he was dressing in drag or teaching future poets, the common thread in all his roles seemed to be something lost with the turn of the century — sincerity. His characters were sincere in the most uncool way. They were men who cried. They were men who loved and laughed. And then they cried some more.

In the same way a baby can scan the face of a stranger and make a swift moral judgement, so too we '90s kids scanned the face of Robin Williams and decided over and over again: This guy isn't bullshit. We can trust him.

And while lots of us were childhood fans of Hook, Jumanji, and Aladdin, for us children of divorce, it was all about Mrs. Doubtfire.

I loved Mrs. Doubtfire . I still do. Its perfect ending is still the only movie clip that reliably makes me cry, no matter what. The lesson had been relayed to me dozens of times since my parents divorced when I was three years old: It wasn't my fault. They loved me unconditionally. And yet I never fully believed it — could never fully access the pain I felt and cry about their divorce — unless I watched that final scene. And so I watched it a lot.

As I got older and discovered The Dead Poet's Society, Good Will Hunting, and even his HBO comedy specials, my loyalty to Williams solidified. Here was an actor who brought the same sincerity to Academy-Award winning roles as he did to Flubber. To me, that is talent.

By the time I went off to college in New York City, Robin Williams would only come up occasionally. What is Robin Williams doing these days?, someone would wonder in a stoned Netflix haze. I'd say that I didn't know, but that I'd always loved him.

In these moments, I often told people that he lived in the Bay Area, where I grew up (though he lived in the wealthy Marin County, and I was from Oakland). I bragged that I almost went to the same private high school his daughter had gone to (except I'd been wait-listed). I'd claim that I knew where the house from Mrs. Doubtfire was (in truth, I wouldn't be able to distinguish the street from any other Victorian-lined San Francisco block).

But I felt I deserved these white lies. I knew where the Mrs. Doubtfire house was because it was imprinted in my mind. It was my childhood home, if my parents had been rich. And Robin Williams had almost been my father, if my father had cried more, and been a movie star.

Robin Williams was the genie in Aladdin. He could have had anything he wished for, and he wished to live where I grew up, in Northern California. He could have chosen any role, and yet he chose to make children laugh — and yes, cry — again and again. He chose sincerity.