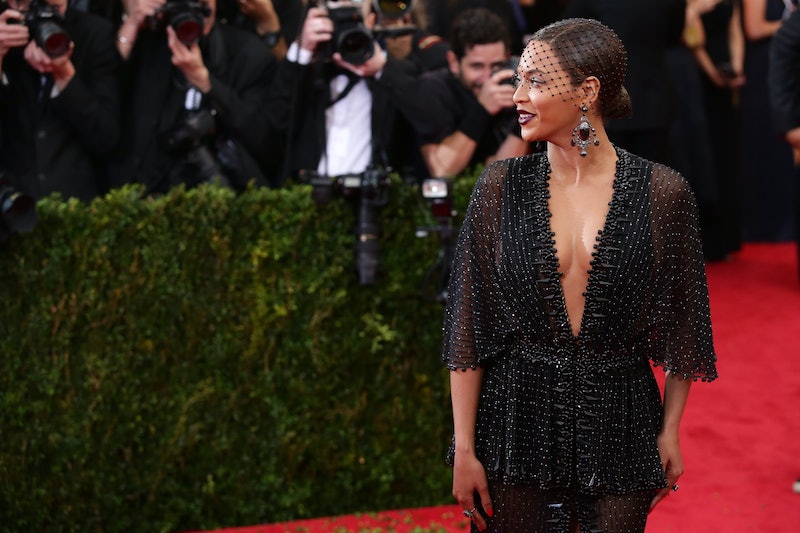 This might be difficult to hear, so let's all take a seat. Maybe take a few deep breaths or clutch the hand of a loved one. Now, before we begin, I just want to remind everyone that everything is going to be okay — different maybe, but okay. By all accounts, it seems like Beyoncé had a nice weekend. She hung out and enjoyed a glass of wine, most likely on some secret celebrity island the rest of us have never heard of. There were throw pillows and a wicker cowboy hat that was seriously working for her. But then, someone snapped a photo and that's when everything changed, because apparently Beyoncé photoshopped an Instagram.

Beyoncé — or to use her formal title, Queen Bey, High Priestess of Bootytown — will stand trial in the court of public opinion for that most egregious of celebrity crimes: purposefully and knowingly editing her Instagram photos. Shock. Gasp. But how will we explain this to the children?

Beyoncé was betrayed by the iPhone and wine glass sitting on the table in front of her — they've obviously been warped by something, and given their proximity to her thighs, most likely Photoshop was used to make them appear smaller. Take a look for yourself:

This isn't the first time Beyoncé's been accused of doctoring her photos. Earlier this year, she posted another photo on Instagram that appeared to have been altered to give the appearance of a bigger thigh gap.

It's a pretty common trend among female celebrities. If you're looking for more beautiful women to resent, here's a handy roundup of other celebrities who have been accused of shaving some pixels in their social-media posts, including Kim Kardashian and Miranda Kerr.

I'll admit, the Internet's rage is a little lost on me here. We know Photoshop's a thing, guys. We know that, much like personal trainers, dietitians, and stylists, it's something celebrities have access to in order to make them more beautiful that those of us living outside of celebritydom (most of us) don't. This isn't new information. Ostensibly, we're all in on the joke here.

As best I can tell, it's all about the medium. We've spent years teaching ourselves, our sisters, daughters, and friends that the images we see in magazines aren't real. The models have been oiled up within an inch of their lives, there's a fan blowing just out the shot, the hair and makeup were done by professionals. It's all fantasy — and so there's a disconnect there.

But social media like Instagram and Twitter are all about showing us the real side of celebrities. It's supposed to be them communicating directly to us. The rest of us certainly aren't going to be doing long, in-depth interviews with Vogue anytime soon, but we use social media the same way celebrities do: to share with the people who are interested in what's going on with our lives. If we're honest with ourselves, it's still a fantasy — we're not friends with Beyoncé, she's not interested in our lives — but in this case, it's a one-way street and we're still expecting to get a non-fantasy version of the celeb. We're not looking at magazine photos, professionally styled, taken and edited; we're looking at personal photos. It's unfiltered, uncut, and unedited — until you edit it. And once you do, you've shattered that fantasy that we're all friends here, just hanging out on Beyoncé's Instagram page, and that's not what we came here for.

But it's not too difficult to see why Beyoncé (or Kim Kardashian, or Miranda Kerr) might be tempted to Photoshop. She's basically held up as this image of human perfection, the standard against which we measure physical appearance (an image, that admittedly, Beyoncé has put a lot of work into creating and perpetuating — remember when she asked for these unflattering photos to be removed from the Internet?). She's as close to perfect as any human being is likely to be, and we'll allow that — as long as it's something that just fell into her lap. As long as she woke up like that. That's the agreement.

But when celebrities break that agreement, watch out — hell hath no fury like the Internet scorned.

More like this
Will Beyoncé Be At The BET Awards To Perform “Break My Soul” Or Attend The Show?
By Jake Viswanath
The Best Memes & Tweets About Beyonce's New 'Renaissance' Album
By Radhika Menon
Big Freedia Reveals The Real Meaning Of Beyoncé’s “Break My Soul”
By Radhika Menon
Beyoncé Might Be Plotting Secret Intimate Gigs In The UK
By El Hunt
Get Even More From Bustle — Sign Up For The Newsletter