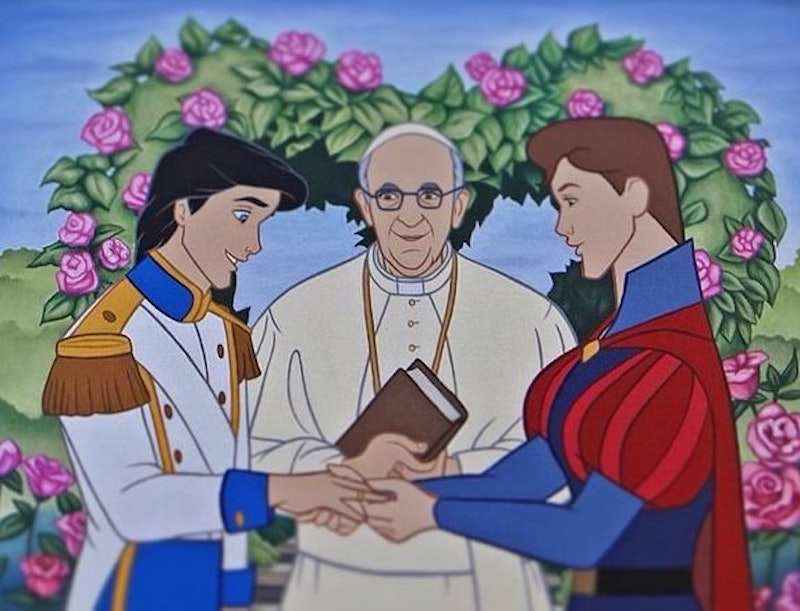 Artist Jose Rodolfo Loiaza Ontiveros has been remixing Disney iconogrophy for quite some time. Remember when Liberty Ross tweeted that picture of a drunk Snow White after news of her husband Rupert Sanders’ affair with Kristen Stewart broke back in 2012? The image was Loaiza’s, and it was part of his “Disasterland” project, which was displayed at the Los Angeles gallery La Luz de Jesus in 2012. Loiaza’s work explores what happens when fables and fairytales become flesh and blood: Far from tying up each story with a bow and a happy ending, the images revel in their messiness, proposing, as the “Disasterland” description reads, “a novel way of reviewing them.” Of particular note, however, are Loiaza’s LGBT reimaginings, a theme which was run throughout each of his exhibitions, from “Disasterland” to 2013’s “DisHollywood” — and which he continues in his current exhibition, “Profanity Pop,” which will be on display at La Luz de Jesus through August 31.

Many have written about the LGBT subtext present in Frozen; others have also used that discussion as a springboard to point out that most Disney movies support the LGBT community, subtly or not. But even so, there has been a lack of strong LGBT representation in most of Disney’s beloved films — a fact which Loiaza’s work tackles head-on. He pairs Belle with Jasmine, Ariel with Aurora, Aladdin with Hercules, and more; he reveals Ursula as a fan of Divine; he even shows us Princes Eric and Philip tying the knot in a ceremony officiated by Pope Francis. Said Loiaza to the Huffington Post about “Disasterland” in 2012, “I think it’s time to stop being afraid and to speak without hesitation about certain taboo subjects.” Ayyyyy-men.

As Eliel Cruz points out over at Mic, “This isn’t to say Disney ignores LGBT dollars. ABC Family currently features the gay-friendly family drama The Fosters and the Disney parks have hosted annual ‘Gay Days’ celebrations for years. So what’s the hold-up?” I’m speculating here, but I imagine they’ve got a case of cold feet. By stepping out of their comfort zone and putting overtly LGBT characters on screen, they risk the ire of a huge swathe of their consumers. I hope, though, that someday — and soon — they’ll get over it and decide to take the plunge. That’s how change is made. If we’re going to create the paradigm shift we so desperately need when it comes to acceptance and tolerance, having major players step up to the plate can only help.

What is it about Disney iconography that makes statements riffing on it so powerful? I’m not totally sure, but something about it clearly resonates with us. We’ve seen it time and time again: In Loiaza’s work, in Saint Hoax’s, in Alexsandro Palomba’s, and in that of many, many more. Although some accuse these projects of killing their childhood, I think the nay sayers are kind of missing the point. The jarring juxtaposition the images depict forces us to think about the lessons we’ve grown up with and which we’re now teaching our children in different ways. And that? Can only be a good thing. The whole point of living is to evolve, to become better, to become something more than ourselves. So let’s get on that, shall we?

Check out more of Loiaza's work over at his Instagram page, and if you're in the LA area, be sure to stop by La Luz de Jesus to see "Profanity Pop" live and in person.