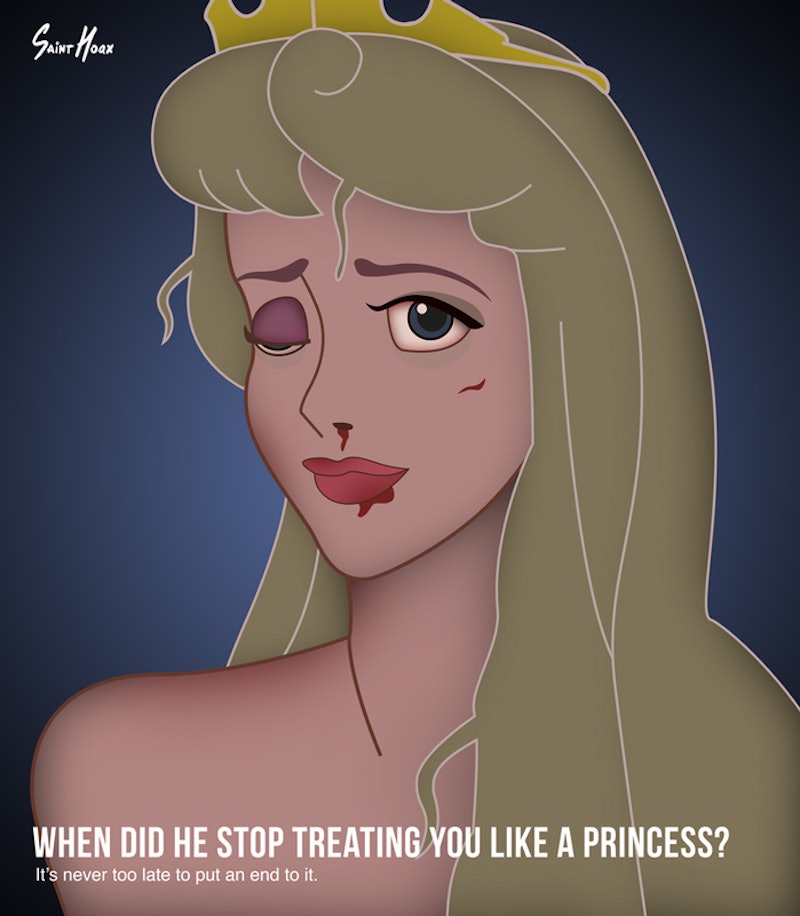 Middle Eastern artist Saint Hoax's “ Princest Diaries” series drew a lot of attention last month, and now his new set of posters, “Happy Never After,” uses Disney princesses again to communicate a serious message. The posters feature Aurora, Cinderella, Jasmine, and Ariel, and this time the topic is domestic violence. Rather than sharing the picture with another character, these princesses fill each frame alone, with their battered and bruised faces taking center stage. The words “When did he stop treating you like a princess? It’s never too late to put an end to it” scroll across the bottoms of the images.

According to Hoax’s website, the series is “an awareness campaign targeting any girl/woman who has been subject to domestic violence.” The statement continues, “The aim of the poster series is to encourage victims to report their cases in order for the authorities to prevent it from happening again.”

If the images of “ Princest Diaries” felt unsettling and uncomfortable, the ones that make up “Happy Never After” are outright horrifying — which means that they’re doing exactly what they set out to accomplish. Hoax’s work is well known for its shock value; but lest you think that's the only thing the artist is going for, know that it’s a calculated move. “I think the act of domestic violence itself is shocking,” Hoax said in a recent phone interview with ABC Action News. “If we want to tackle it in any way we have to shock the audience in order for us to pass the message across.”

Obviously not everyone is going to agree on this point — Nicole Worthington of the organization Community Action Stops Abuse, for example, told ABC Action News that while "anything that brings attention to domestic violence and gets people talking is a good thing," CASA probably wouldn’t choose to run something like “Happy Never After”; “Our model is all about empowerment, so that is not really the empowerment model," she said — but the fact that Hoax’s choices always have a good deal of thought behind them lend strength to the argument.

The one thing this particular series doesn’t address is the fact that not all abusers are men, and not all victims are women. At the same time, though, I can’t really give him too hard a time about it; the series intentionally focuses on women, with the Disney princesses having been chosen specifically for that reason. “Disney princess [sic] are perceived as ideal females,” Hoax wrote to the Huffington Post in an email. “They belong to a fairytale land where happy ever afters are bound to happen. But what happens after the happy ever after?” The artist continued, “By portraying Disney princesses as victims of domestic violence, I’m proposing the idea that no girl/woman is safe from being emotionally/physically/sexually abused.” But, as Hoax puts it, the purpose of both “Happy Never After” and “Princest Diaries” is simply to drive home this message: “Victims of abuse are not alone, and it’s never too late for them to take a stand.”

If you or someone you know is or has been a victim of domestic violence, call the National Domestic Violence Hotline at 1-800-799-SAFE (7233).

More like this
The “Teenage Dirtbag” Trend Is TikTok's Latest Nostalgic Obsession
By Meguire Hennes
Lotus Biscoff Does A Biscuit-Chocolate Hybrid Now
By El Hunt
Your Daily Horoscope For August 16, 2022
By Alexandria Lettman
How To Use The Whatnot App To Thrift Vintage Items
By Emma Carey
Get Even More From Bustle — Sign Up For The Newsletter