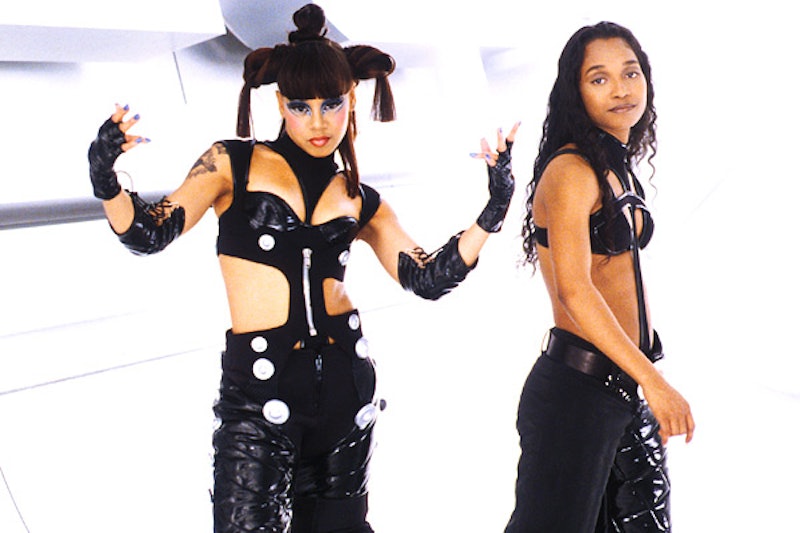 There are so many things to love about the '90s, and music videos are no exception. In the days when MTV's Total Request Live ruled the television screen music video consumption was at an all-time high. After all, the '90s were a time of music video evolution, when the pop bands were king and stylish visuals become just as important as the music itself.

The message '90s music videos were spreading was loud and clear: Individuality is in, and conforming to norms is way out. The fashion became just as essential as the lyrics, and stylish apparel in the '90s brought to the forefront specific pieces of clothing that signified an identity for each individual member of any musical group. Whether it was the Spice Girls in scantily-clad leather or TLC placing a futuristic spin on a simple tank top and pants, fans ate it all up.

I miss the days when I was itching to find the same track suit that Gwen Stefani became famous for during No Doubt's prime in the '90s. With that said, I have collected what I feel is a fair representation of what made fashion in music videos from the '90s a stylish walk to remember. Ranked by importance, of course!

Technically this video doesn't showcase the top trends at the time, but the sheer amount of effort that went into the creation of these costumes was enough to make a solid impact. Daft Punk was beginning to gain speed and introduced a new concept in design and style with their outlandish approach on fashion.

As if they weren't already dorky enough, Weezer's Happy Days inspired music video for "Buddy Holly" sealed their fate as the ultimate nerds. Their cream colored cardigans had me sold from the get-go.

The first and only time I considered silk pajamas as daywear. I'd like to also acknowledge the fact that TLC was wearing matching variations of the same outfit per member well before Destiny's Child started doing it.

It was colorful, and tacky, just like the song. Need I say more?

The costumes in this video are elaborate enough to keep viewers engaged with each passing frame. If there was a Grammy for best costume in a music video, I'd nominate The Smashing Pumpkins, "Tonight, Tonight" in a heart beat.

Before she made Clueless, Alicia Silverstone was Steven Tyler's muse — which is equal parts sweet and creepy. The video for "Crazy" featured Silverstone alongside Liv Tyler in a montage of "bad girl" moments meant to make us drool with lust and affection. And their fashion was totally on-point.

It may not be the most stylish music video on this countdown, but one thing is for damn sure: That striped short sleeve tee over top the long sleeve shirt went down in fashion history for grunge lovers everywhere.

It was a grand anthem at the time of it's release and really spoke volumes to what was fashionably "in." The group showcased street style that felt attainable instead of the usual over-the-top displays.

Using the same concept as Len, the New Radicals brought street style to the screen as well in this video. What made it feel more down to earth was the mall setting that featured everyday people in their every day clothes.

Courtney Love is definitely not the most adored performer from the '90s, but girl was rocking the naked dress before Rihanna was even on our radar. For the most part she was just plain trashy, however in the video for "Malibu" the color concept and melodic flow would prove to be the only time she would get it right.

I know, I know, it is SO hard to choose a Destiny's Child video that stands out among the rest. Oddly enough, their most stylish music videos came after the year 2000. But, "Bug a Boo" upped the ante in style following "Bills Bills Bills"

Their white t-shirt and jeans made me melt, and everything else simply distracted me from their truly terrible hairstyles back then.

When is comes to outfit coordination, the Backstreet Boys did it best. The music video for "As Long As You Love Me" is a true testament to that statement.

At the end of the '90s TLC got creative with a futuristic fashion that would never be able to translate to street wear. But, it was super fun to look at.

Remember when Beyoncé's mom use to make all of Destiny's Child outfits?

The Backstreet Boys strike again with their flawless effort in coordinating each other's outfits. It's impeccable, and that's all I have to say about that.

It was an epic battle between first and second place, but the Spice Girls snag the number one spot for their fun approach with apparel. The intro for "Say You'll Be There" introduces each member with their pseudo personality for the video which continues to play into their themed outfits. On top of that, many fans of the group looked to the girls for fashion inspiration as they brought platform running shoes and micro mini skirts to the top of the fashion game in American during the '90s. Well played Spice Girls. Girl power for life!