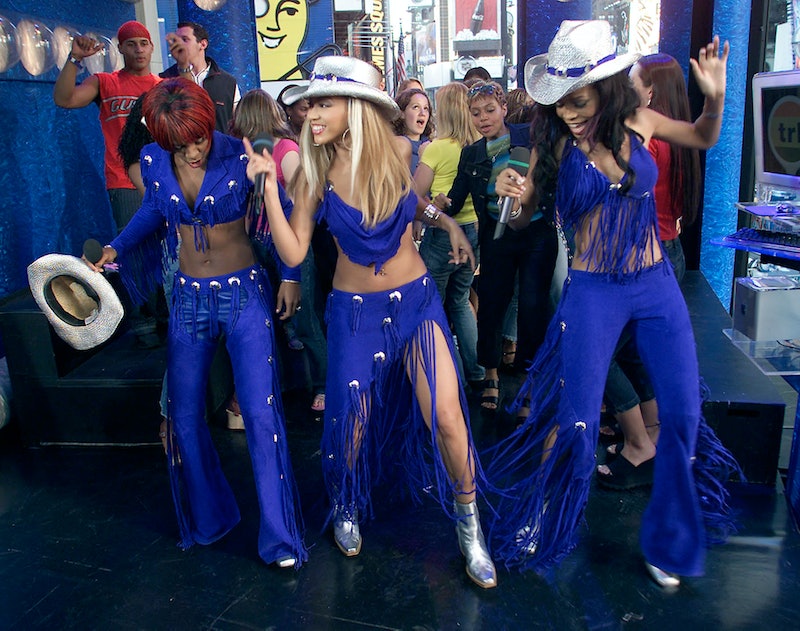 When news broke that Total Request Live would be returning to MTV for one day only, we were overcome with excitement. The video countdown, the screaming crowds of tweens, the crazy outfits, they’re all coming back this Wednesday. As an added plus, Ariana Grande and her perfect hair will be hosting. Be still, our beating hearts! With the fateful date just around the corner, fond memories of bygone TRL days have come flooding back. I'm specifically remembering the outfits. Not to mention, the oh-so-consistent blahness of Carson Daly.

In the early 2000s, TRL was an arena for our pop icons to don some truly seminal outfits. In the days before everyone used the Internet, this show was one of our primary ways to ogle our favorite stars and their personal style. From the gloriously tacky coordinating ensembles of Destiny’s Child, to Britney’s midriff-baring tops, and all the dressed-down denim in between, TRL was a place where our pop culture luminaries could be as dressy or as casual as they pleased. That is, in a totally over-the-top way befitting the early 2000s. It was a safe space, where pop stars and movie stars could mingle with the American Eagle-clad masses. Their outfits would say “I’m just like you!” or “I’m totally not a real person, but you love me for it!”

In anticipation of the show's comeback, let's check out some of the most ridiculous fashion moments in TRL history. Maybe you’ll get some outfit inspo for your viewing party. Don’t even pretend like you’re not having one.

Clearly, these two were meant to be from the early stages.

This is everything that early aughts J.Lo should be. Wearing a leather hat, covered in bubblegum pink, and looking like she just rolled out of the airport. One pant leg is rolled up for some inexplicable reason.

Back then, we had no clue that this ensemble was low on the crazy outfit meter for Lady Gaga.

From the shredded belly shirt, to the visible thong, to the scratched up leather pants, this outfit truly could only exist in the early 2000s. We'll call it "dirty business on top, party on the bottom."

5. Every time Christina Aguilera showed up.

Note the side-lacing on the skirt...

It's no pair of mermaid pasties, but we'll take it.

You weren't an official pop star couple until your outfits matched.

8. Destiny's Child and the rhinestone rodeo.

Thank you for learning to sew, Tina Knowles.

And jackets over white shirts.