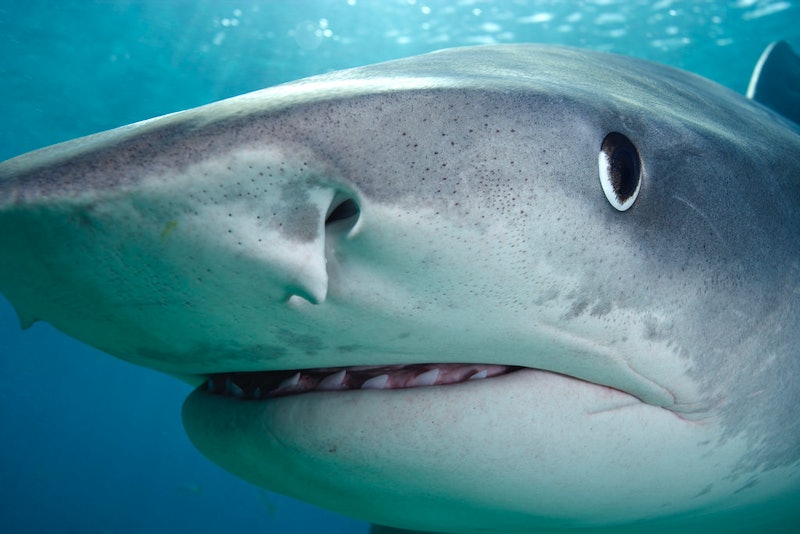 Shark Week is upon us and the Discovery Channel schedule is jam-packed with awesome-sounding programs. In the more educational of them, the audience is often reminded that sharks may eat humans, but not all that often. You're more likely to get killed by a vending machine than a shark. But while it's true that people aren't a shark's favorite meal, they don't just restrict themselves to a diet of sea life. The weirdest things can be found in the belly of a shark from clothing to toys to animals you never even see near the ocean.

The most common culprit of this strange feeding behavior is the Tiger shark. Nicknamed the "garbage can of the sea," these deadly animals have been found full of the oddest objects. But occasionally other sharks like Greenland sharks, Sand Tiger sharks, Lemon sharks, and more have also been discovered with strange stomach contents.

Cutting open the stomach of one of these creatures just goes to show you what people are dumping in the oceans these days, and the sharks are paying the price. After all, it's not like sharks are strolling on to land to eat tires, shoes, and more. That stuff usually finds its way into the water thanks to some thoughtless humans. So here are the 16 weirdest things ever found in a shark's stomach.

The Greenland Shark hunts in the polar waters off the coast of, you guessed it, Greenland. The animal can live until the age of 200 and grow to 23 feet long. That makes them excellently equipped to eat huge animals like polar bears, who are usually considered pretty fearsome themselves. I certainly wouldn't want to meet one of these guys in the ocean.

The Daily Mail reports that Greenland sharks have also been found with full size reindeer in their stomachs, antlers and all. So can someone please explain what a reindeer was doing in the ocean?

From nearly every state, including land locked ones like Kansas. They're a popular meal for many a Tiger shark, but they're not picky. In fact the rest of this list is comprised of things found in Tiger shark bellies.

Unfortunately National Geographic says tires are a pretty common thing for sharks to eat because humans are terrible and think the ocean is a trash can.

I can see how some (thoughtless) person could chuck a chicken coop in the ocean to discard of it, but with the chickens still inside? Okay then.

According to The New York Times, one shark had even eaten an expensive fur coat. Some rich lady was probably really mad about this one, I'm sure.

Losing your shoes to a shark must be even worse than losing them on the NYC subway tracks (which I have done, so I know.)

According to Shark!: Killer Tales from the Dangerous Depths, everything from an adult spaniel complete with a collar to a bulldog's head have been found inside a Tiger shark's stomach. Long story short, keep your pups out of the ocean.

You have to figure with all the time networks spend filming sharks underwater, they're gonna lose a camera or two. Here the inquisitive Tiger shark swallowed the camera while it was still running, giving us an up close look inside the mouth of of the world's most dangerous animals. The moment comes at about 3:13.

What was a horse doing in the ocean? The world may never know.

A BAG OF MONEY

That's a rough thing to lose. Except I feel like no one but bad guys carry money around in bags, so maybe it's a good thing that they lost their stolen goods.

Hey, sharks deserve to have safe sex too. ReefQuest Centre for Shark Research reports that an entire contraceptive packet was once found inside a Tiger shark.

With the hair still intact and everything.

Researchers in Delaware caught more than they bargained for when a Sand Tiger shark leapt out of the water to grab their captured Dogfish shark. Once again proving that sharks are the most bad ass animals in the ocean.

More like this
'Black Mirror' Season 6 Is Reportedly In The Works, Here’s What To Expect
By Maxine Harrison
Eleven Turns To An Unlikely Source To Regain Her Powers In Stranger Things 4
By Brad Witter
The 7 Best Slow Feeders For Cats
By Masha Vapnitchnaia
The 10 Best Cat Puzzle Feeders
By Lauren Moison
Get Even More From Bustle — Sign Up For The Newsletter