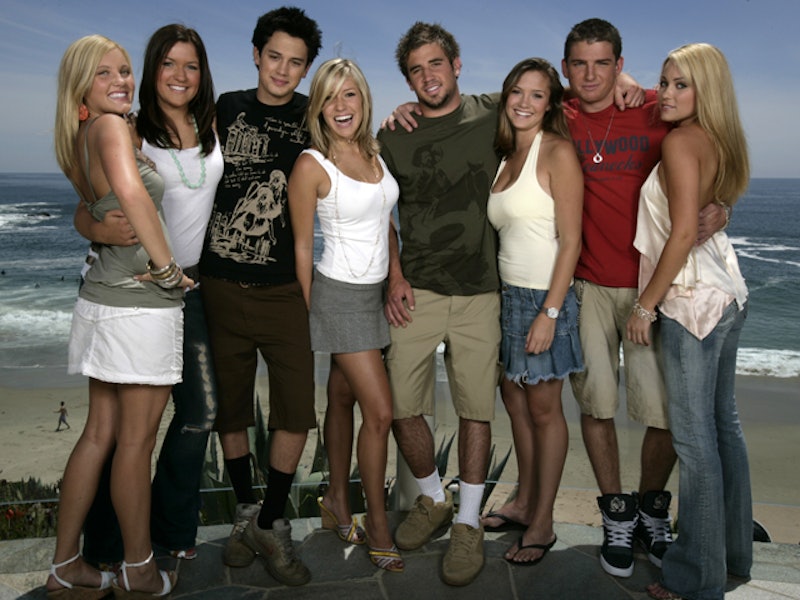 I'm comiiiiing cleeean — I've been feeling very 2004 for the past few weeks with Retro MTV airing Laguna Beach and The Hills just ahead of Laguna Beach's 10-year anniversary in September. And even the iconic LC is feeling the nostalgia. Surprise, surprise. Maybe it's because she saw the Laguna Beach Season 1 clip of her predicting her future or she's just really reevaluating her life now that she's 10 years down the road from her reality TV start. Either way, on Aug. 13 Lauren Conrad wrote a blog post with advice to her 18-year-old self and while wearing sunscreen is pretty great advice, she could do better. Just saying.

Hindsight is 20/20, right? Conrad starts out the blog post by stating what any real fans of The Real Orange County know already — that it's been a decade since she graduated high school. The reality-star-turned-designer continues, "So crazy! In light of my 10-year reunion, I’ve been doing a little reflecting," — to which my mind immediately asks, "Did she finally realizing that Stephen manipulated her for, I don't know, their whole friendship?" Apparently not, because bashing people isn't LC's style — instead she imparts three pieces of advice she'd give her high school-aged self: Wear sunscreen, enjoy being young, and be an individual. Practical? Yes. The best pieces of advice? Aside from the sunscreen assertion, not really.

While I'm not expecting Conrad to dwell on her less-than-perfect reality past (she's too classy for that), I expected her to pull a "guys aren't everything" (she learned that the hard way, cough Paris) or "love yourself first" (again, learned that the hard way) kind of thing. Or, at the very least, a "don't waste your time trying to get a guy to fall in love with you (when he already has a girlfriend)."

So, in the spirit of feeling like every Laguna fan definitely knows best what advice the series' stars' 18-year-old selves really need to hear. Here's some imaginary advice that Kristin, Stephen, and the rest of the Laguna crew should be giving to their high school selves:

Dear Queen B Kristin — You're better off being single in high school. Guys are just going to try to hold you down and you're just trying to have the best possible senior year. You just don't need that drama, drama, dramaaaa. You're too cool for that. Sincerely, Your Biggest Fan (aka yourself).

On Being Friends With Girls:

Dear Steeepheeen — You can't be friends with girls if you constantly manipulate them. Seriously, it just doesn't work that way. If you have a girlfriend and want to have a girl best friend, don't hit on her because she probably really likes you. People deserve respect. Sincerely, Me.

Dear Morgan — APPLY TO MORE THAN ONE COLLEGE. IT'S NOT THAT HARD. HAVING A BACK-UP IS GOOD. UGH. Bye.

Dear 18-year-old Talan — Kristin may have hooked up with you and you really want to be with her, but it's just not going to happen. And, really, everything you like about her are characteristics that'd make her a bad girlfriend. You deserve better. Sincerely, Me.

Dear Jason — If you don't like someone, stop dating them. It's really that easy. I know cheating seems easy, so you don't have to deal with the break-up stuff, but that's a really dick move. Also, don't leverage your relationship against your girlfriend's life-changing career opportunities — it's uncool. P.S. you should really should shave more. Sincerely, Me.

Dear Jess — Don't be afraid to break-up and know your worth. Because really, if everyone says that someone's cheating on you, they probably are. And if you stay with that person, no one will feel sorry for you when it's over. Just break it off because it's really not worth it — you're only 18. Sincerely, Me.