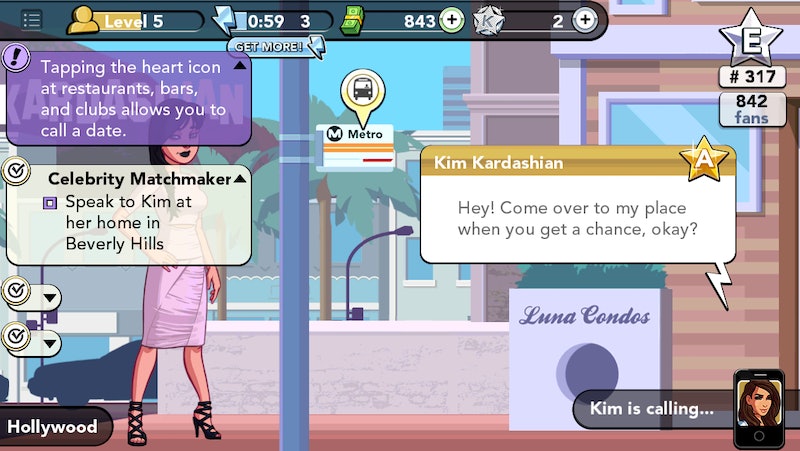 If I were to pick a song title that describes my relationship with Kim Kardashian: Hollywood, it would be Sheryl Crow's "My Favorite Mistake." Over a month (or has it been two? I'm losing track of the days, TBH) has passed, and the iPhone game continues to dictate my life. No, I don't want to go to the beach today. I get terrible reception there. How am I supposed to finish this appearance at Oak without reception? You go have fun soaking up actual sunshine. I'd rather sit in a living room illuminated only by the faint glow of my iPhone screen.

(Okay, okay. I did go to the beach. But I didn't leave my apartment until I'd locked down all five stars at that Oak appearance. This came at a cost, however: Because I spent so much time playing the game before I left, I ended up rushing through the sunscreen application process. I missed some spots. My left shin now looks like it was stained with beet juice.)

I probably shouldn’t have downloaded the game. But I did, and so here I am. Hooked like a fish on a lure. I love it and I never want to stop playing it. It is my favorite mistake.

Yahoo Tech spoke with psychologist Simon Moore about what it is that makes KK:H so addictive. I couldn't pull up the story fast enough. YES! A real psychologist! Who knows and studies and understands actual psychology things! He will articulate my relationship with this game better than I ever will!

Yeah, my understanding of psychology is rudimentary at best, but that doesn't mean I don't like reading about it. I want to at least try to comprehend the gears and cogs that make me tick. Fortunately for my layman brain, Moore explains the game's psychological affect on players in a fairly simplistic, easy-to-follow way.

On the visual appeal of the game:

Psychologically we are predominantly visual creatures.

We are in fact predators — our eyes are on the front of our faces — as a result, our brain gives a lot of attention to visual stimuli.

If brains were to power-rank the five senses, sight would be at the top.

The exaggerated make and shake of the female body [in the game]: large eyes, amazing hair, are all things designed to be attractive and engaging visually.

Brains really like to look at hot cartoon characters.

[The scenery is] designed to make us feel warm and happy but not overly excited. Excitement as an emotion is very short-lived and intense, and results in a ‘come down.’ Better to create happy and pleased emotions. These can be experienced for longer time periods.

On tapping objects to receive rewards:

It’s the most fundamental law of psychological conditioning. The quicker we get a reward for an action, the more likely we will remember and repeat it.

KK:H is training me to tap on mopeds like a human trains a dog to sit on command. T-R-E-A-T-S!

On waiting for resources to replenish/the in-app purchase temptation:

The longer we have to wait for something it becomes a punishment. Humans are lazy and impatient, so games play on this impatience and unwillingness to wait.

Whoa. THAT explains why I feel like I’m wearing a dunce cap and sitting in "time out" whenever I wait for my lightning bolt count to recharge.

On why it's so hard to quit once you've started:

The longer you wait for a bus that doesn’t show, the stronger the argument you need to persuade you to leave the bus stop, as you’ve already invested so much time and energy into it. They allow you to progress quickly to start to build up your investment perception, and then it starts to get harder. At this point you can leave the game. But that might make you look silly. Why did you start it in the first place?

Is this like when I decided to watch a certain TV series on Netflix (not going to name names) and realized eight episodes in that I hated it? But rather than quit the show, I'd told myself I'd gone too far? And I genuinely believed I had no choice but to sit through the entire boring and bloated and overrated series?

Because I get that.

People are more concerned about losing what they have collected than gathering new things. In this game, if we don’t continue playing or upgrading our characters, then we cannot access other parts of the game. We start to ‘lose’ what we have already invested in.

Huh. I never thought about my avatar as an investment. Next time someone asks me what I'm doing when I'm clearly playing KK:H, I'll tell them I'm checking up on my investments.

On playing the game with friends:

Games are really clever by suggesting that you can wait 10 minutes to get a reward, but by then your friends could be well ahead if you in the game. It’s a double-whammy: conditioning with social conformity and fear of peer ostracism.

Sounds like a case of FOGO: Fear Of Game Ostracism.

Oof, I don't know about you, but I am tuckered out after all of that.