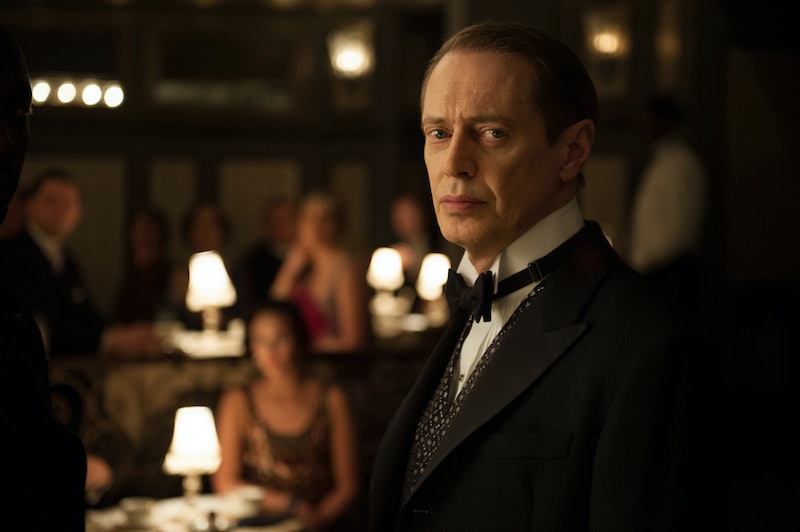 "No One Goes Quietly." That's what all the posters and promos have been claiming in regards to the fifth and final season of HBO's crime drama Boardwalk Empire — and the first full-length Boardwalk Empire Season 5 trailer takes that tagline literally, underscoring the video not with the swinging jazz music you would expect from the season's 1931 setting, but with the rocking strains of "Tranquilize" by The Killers.

"Tranquilize" was the first single from the band's 2007 compilation album Sawdust. The song was written by Killers frontman Brandon Flowers and features a collaboration with Lou Reed of the Velvet Underground. It's an interesting and unexpected choice of music to accompany the old-timey images flashing across the screen. The song doesn't even kick in until about thirty seconds into the trailer — up to that point it's all dialogue by Vincent Piazza's Lucky Luciano and Steve Buscemi's Nucky Thompson — so when the music does start, it's jarring in its modernism.

While it may seem strange to juxtapose a show with such stringent attention to period detail alongside a post-punk revival band, the choice is appropriate for several reasons. For one, the contemporary music signals a shift ahead in time for the show. No, Boardwalk Empire isn't time-warping to 2007, but Season 5 does pick up after a major time jump: seven years will have passed since the events of Season 4, ushering the show from the Roaring Twenties into the beginnings of the Great Depression.

The second — and most obvious — connection is the name of the band itself. I mean, they're called The Killers, for goodness sake. For such an unflinchingly violent show, it's hard to get more appropriate than that. But the name of the song is also befitting to the themes of Boardwalk Empire. Whether literally or figuratively; whether with alcohol, heroin, crime, power, or sex; pretty much every character on the show is trying to numb themselves to the violent and unpredictable world around them.

And then there's the lyrics:

The chorus of "Tranquilize" paints a clear picture of vengeance, which is more than likely going to be a central conceit of Season 5. (It's also ironic, since the show won't be coming back for more — seeing as how it's the final season and all.) More interesting than the chorus, though, are the parts of the song that are omitted from the trailer, specifically the final verse:

Those lyrics paint a decidedly more optimistic picture than the rest of the song. Does this hint at a message of hope hidden within the final season? Or does the fact that this verse was left out signal that all hope is lost for Nucky, Al Capone, Gillian Darmody, and all the flawed but fascinating characters of Boardwalk Empire? We'll find out when the final eight episodes begin airing Sunday, September 7.

In the meantime, check out the trailer in all its glory here: