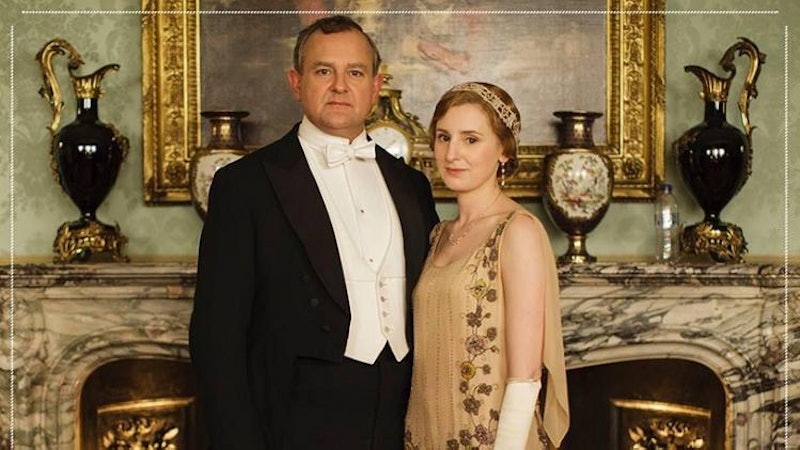 If you're not aware of it yet, allow me to introduce you to the magic of Downton Abbey 's newest promotional photo. In what was either a genius move or a total airheaded mistake, a very modern plastic bottle was left on the mantle of a very old fireplace that's supposed to be set in the 1920s. Now, I will admit to not being the biggest history buff, but even I know that plastic bottles weren't around back then. It's unclear whether or not ITV put it there on purpose in hopes that the Interwebz would catch wind of it and turn it into the meme that it's become (thus gaining a ton of free advertising) or if it was really just a mistake, but, either way, it's amazing. And, of course, the Interwebz did what it does best, and made it into something even more amazing.

Apparently, if you go on Twitter right now and search "Downton Abbey," you'll be inundated with images pointing out the gaffe...and some that have a little something extra added to make fun of the mistake. Personally, I think Downton Abbey should embrace the error next season and just give everyone iPhones (or cast Batman!), but that's just me. Check out the best edits below:

More like this
Does 'Locke & Key’s Ending Mean There Could Be A Season 4?
By Sophia Moore
Nicola Peltz Has Addressed Her “Feud” With Victoria Beckham
By Sam Ramsden
'The Simpsons' Will *Finally* Address How They “Predict The Future”
By Sam Ramsden
Why Did Meatball Leave 'The Bachelorette'? His Second Chance Didn’t Last Too Long
By Grace Wehniainen
Get Even More From Bustle — Sign Up For The Newsletter