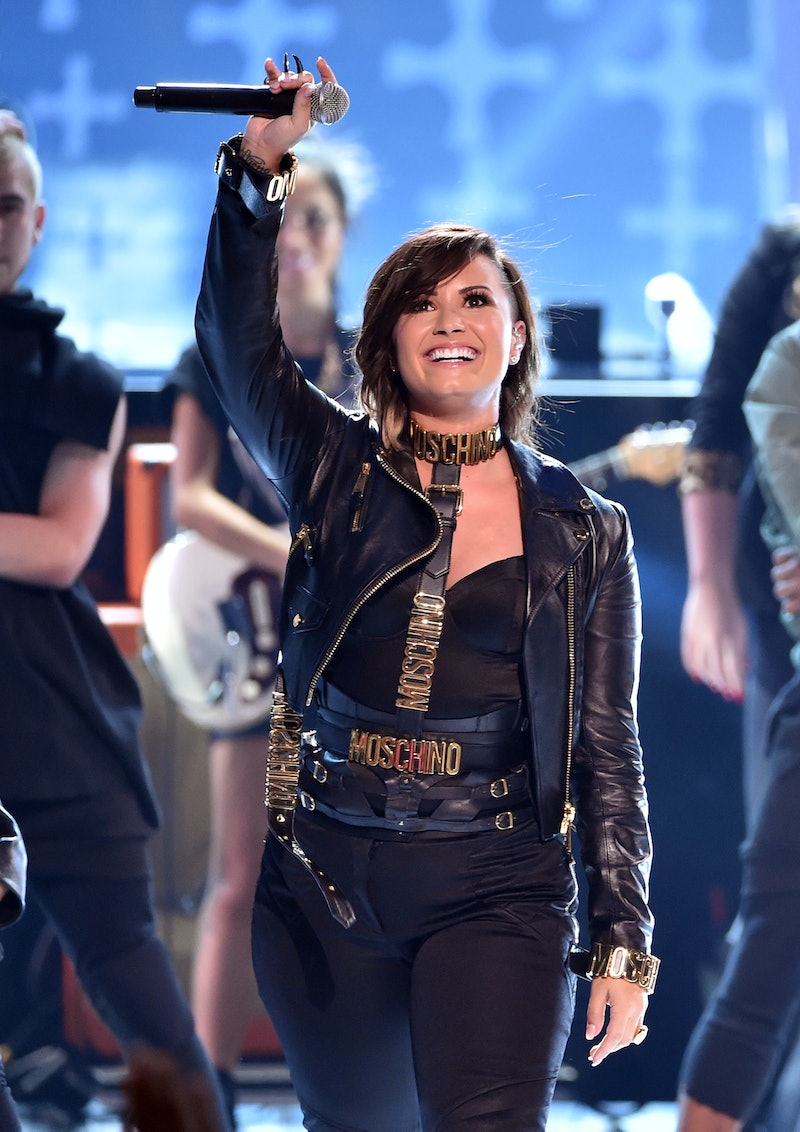 There's no doubt that Demi Lovato strives to be a good role model. She can be seen talking about everything from her own struggles with depression to fighting against bullying. Now Demi Lovato is taking on the stigma of bipolar disorder, which the singer has admitted she suffers from. Lovato is opening up and laying it all on the line in hopes that she can help others who suffer from mental illness. In partnership with The Mental Health Listening & Engagement Tour, Lovato has released a video showing her speaking up about having bipolar disorder.

I'm Demi Lovato. I'm a recording artist, author, songwriter and actress. I'm also living with bipolar disorder. I've seen some dark times, especially with the depressive phase of the illness. Bipolar depression really got my life off track, but today I'm proud to say I'm living proof that someone can live, love and be well with bipolar disorder when they get the education, support and treatment they need ... I want to shine a light on the people out there who, like me, are learning to live well with mental illness by getting the right diagnosis and the right treatment plan.

It certainly can't be easy to share something like that on a national stage, but it's not the first time Lovato has shone a light on mental illness to raise awareness. Here are 5 other times she took a stand against the stigma.

WHEN SHE OPENED UP ABOUT HER DAD'S STRUGGLE

If sharing your own story is hard, it must be even harder to share the details about your father. But Lovato did just that when she opened up about her estranged father's own battle with mental illness. "At the end of the day, he's still my dad and I grew up with him and he was a wonderful person," she sad while on Good Morning America in 2013. "I'm a firm believer that everything happens for a reason. I've dealt with mental illnesses, but my father also dealt with mental illness and he was not able to function very well in society."

Sharing her experience with her father's mental illness could be a wakeup call for any of her fans whose parents also struggle with similar illnesses. Knowing you're not alone when you're a child dealing with something like that can be very powerful.

WHEN SHE LAUNCHED THE LOVATO TREATMENT SCHOLARSHIP PROGRAM

To honor her father after his passing, Lovato started the scholarship program to pay for people with mental illness to get the treatment they need. It's not a foundation with donations, rather Demi Lovato herself is paying out of pocket to help these people. It doesn't get much more "walking the talk" than that.

WHEN SHE TALKED ABOUT HER EATING DISORDER

Lovato has admitted she struggled with eating and her body image from the age of eight.

I started overeating, compulsively overeating. I would bake cookies and then eat the whole pan. I went from doing that to being unhappy with my body. I went to just completely starving myself and that turned into throwing up and starving myself and it was just this crazy battle going on inside of me.

Eating disorders have their own stigma around them, with many people still refusing to accept that it's a disease, not a choice, and is its own form of mental illness. For Lovato to share her struggle, could help so many other young girls out there, and she continues to be open about that time in her life.

WHEN SHE ADMITTED SHE IS BIPOLAR

In 2011 Lovato took a brave step in admitting to the world that she suffered from bipolar disorder. For her, she never even knew she was until she went to rehab. But with that knowledge in hand, she now hopes to share her story so that other people can get diagnosed before things get as bad as they did for her.

[Cutting] was a way of expressing my own shame, of myself, on my own body. I was matching the inside to the outside. And there were some times where my emotions were just so built up, I didn't know what to do. The only way that I could get instant gratification was through an immediate release on myself.

WHEN SHE ANNOUNCED HER SUPPORT FOR OTHER SUFFERERS OF BIPOLAR DISORDER

When Catherine Zeta Jones was being treated for bipolar II disorder, Lovato made her feelings known on Twitter.

Standing up for others who are also going public with their mental illness is just another way that Lovato is breaking down the stigma.

Lovato once said, "I know that if I can use my voice to speak to one person, or one family, then I've done my part. I feel like it's no coincidence that God put me through all of this and has also given me the voice that I have." And through the work she's done thus far I'd say there's no doubt she's doing her part to help those suffering from mental illness.

Watch her latest PSA with The Mental Health Listening & Engagement Tour below: