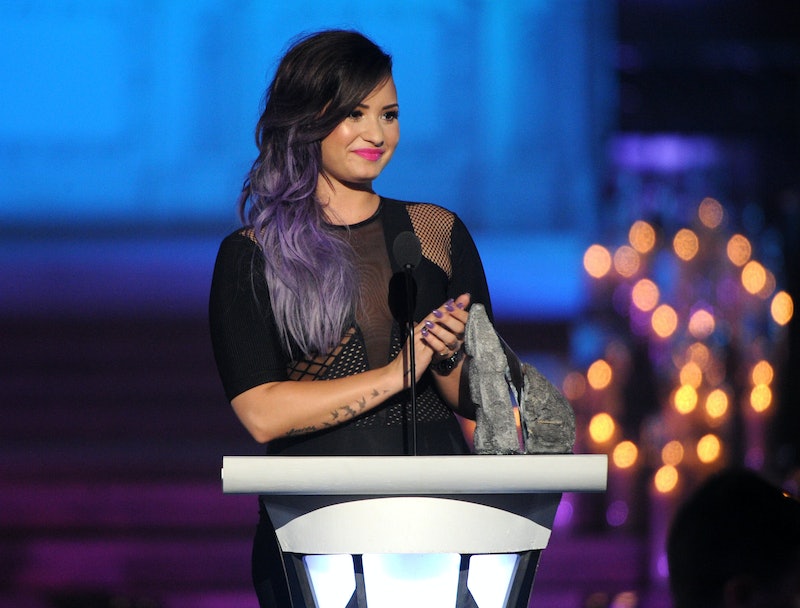 As LGBT pride month draws to a close, known ally Demi Lovato is continuing to support the members of the gay community. Speaking at the Trailblazers Awards on Tuesday, Lovato opened up about her gay grandfather for the first time and told a short but moving story about how she inherited his bravery.

My grandfather was a trailblazer himself. He was brave enough to come out in the 1960s, and I feel that a lot of my spirit has come from him. He passed away a few years later and I only wish he could have been able to see all the progress that has been made. It's such an honor to be welcomed and embraced by the LGBT community, so thank you very much.

Lovato has been just as embracing and welcoming to the LGBT community as they have been to her. Earlier this month, she was the grand marshal of the Los Angeles gay pride parade and she will also be singing at the New York pride parade festivities on June 29. "I am thrilled to be a part of both events as they are a wonderful celebration of independence and self-confidence," Lovato said of the honor.

The singer's attitude towards the LGBT community has always been positive, perhaps spurred on by the memory of her grandfather. "I have been an active advocate of the LGBT community and am wholly committed to supporting individuality and being comfortable in one’s own skin," she said in early June.

She's very aware of how important it is that she be a role model when it comes to LGBT acceptance, especially after signing onto Glee last season as Santana's girlfriend Dani. “There are very few ethnic LGBT characters on television, so I am honored to represent them," she said last September. She spoke about Dani and the hope she could bring to those watching the show.

I don’t want people to take from this, "Oh my god, Demi is kissing a girl," I want people to take from it [that] this is actually an incredible step in our generation today where I’m able to play a young lesbian on primetime TV. I’m honored to be able to be hopefully inspiring people with my character to be who they are and not be afraid of it or ashamed.

And when DOMA was struck down last year, Lovato was quick to speak her praises on Twitter.

As much as celebrities often like to pretend they're not role models, it's always inspiring when one embraces that status and uses it for good. Kudos to Lovato for sharing her grandfather's story and for continuing the fight for LGBT rights. Watch her touching speech below: