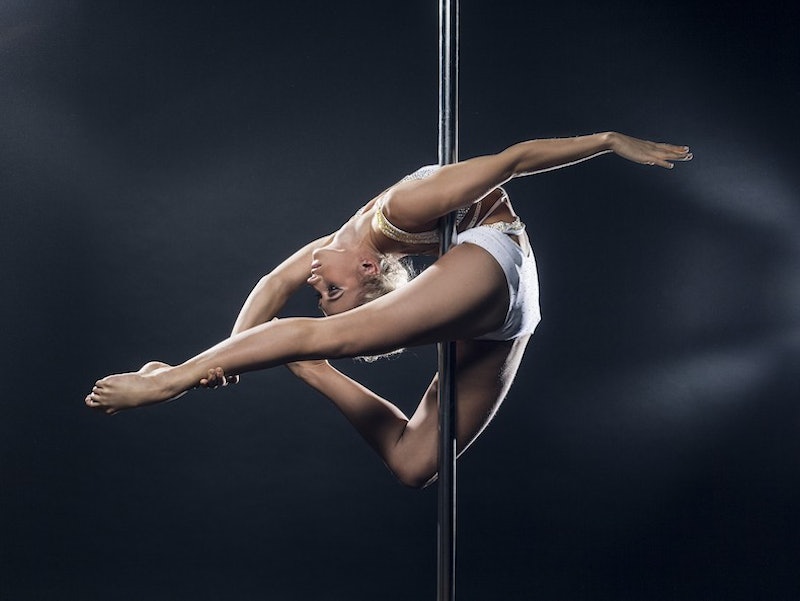 There are a lot of crazy trends in fitness: the Shake-Weight, electric ab belts, face yoga. But among these fringe workouts, some of them — whether they've been around forever and weren't considered exercise, or are brand spanking new versions of a tried-and-true gym trend — are legit, and gaining more and more popularity. So I tried them. And it was hard. Because as funny, weird, or off-the-beaten-track as these workouts might seem, they are no joke. After all, there's a reason surfers (and pole dancers) look as hot as they do, right?

Anyone who's seen someone who knows what they're doing on a pole can respect the amount of athleticism necessary. But, when I tried it myself, my appreciation shot to a whole new level. At Body+Pole, I took a super basic intro class to all things pole — basically, we learned how to hold the pole and swing, in a sort of fireman move, while keeping our core super still, and climb up and down the pole using just our hands. My crowning achievement was the half-flip above, which (clearly) I couldn't actually manage on my own.

Despite our basic intro, my whole body was sore the next day. "The uniquely designed exercises focus on lower and upper body muscle groups, as well as creating core stability," explains Body + Pole co-founder Kyra Johanessen. "It's hard, but you'll have a blast!"

You'd think a trampoline-based workout would be all about the legs. And you'd be wrong. As I learned at Jump-Life, these low-impact cardio classes are like step aerobics on steroids. Thanks to the elastic mat (otherwise known as the trampoline), you can feel your abs lock into place after just a few jumps — your core stays engaged the entire time, at least, it does if you want to keep jumping upright — and everything becomes cardio, even basic squats, once you start bouncing up and down. Plus, after ten minutes of arm exercises with minuscule two-pound weights, you feel like you've been dead-lifting 200 pounds.

It's as much a dance class as it is cardio/strength-training, and a great playlist can make your workout next-level. But here's the key to the whole thing: rebounding helps increase the output of your thyroid gland, which helps restore your body's energy. So, no matter how much the workout kicks your ass, you're guaranteed to leave with a boost.

Move over, Soul Cycle. Spinning has reached a new extreme by sinking to a new low — the shallow end of the pool. Yes, it sounds crazy to ride a bike underwater. But it's actually an insanely good workout. I tried it out at the spa-like AQUA Studio, where we did sprint intervals and hill climbs just like a regular spin class. Not like indoor cycling, however, was the workout my arms got — pushing and scooping and dragging my arms through the water — made my muscles burn (I even broke a sweat, despite despite the fact that I was shoulder-deep in a pool).

The best part? I wasn't sore the next day. Even though the water causes you work at a higher intensity and burn fat faster, it also keeps from causing any micro-trauma to your muscle fibers or tissues. It's like the best possible combo of spinning and swimming, without the workout hangover.

Despite the fact that Manhattan is an island, there aren't a ton of opportunities for me to catch some waves on the reg. Instead, I tried Surfset Fitness for an interval-based workout that combines yoga, body sculpting moves and high-intensity cardio for a killer session, no waves required. You work out on a real surfboard, which is propped up on and lashed to buoys, so every move involves an extra balance challenge that keeps your core working for the entire 45 minutes. Imagine doing a lunge on a moving surfboard out in the ocean. It wasn't very graceful indoors, either.

What I loved about Surfset, though, was how fun it was — every though I wasn't on the water, the whole class was designed to feel like I was prepping to paddle out, and then actually surfing some monster waves, so every muscle group got its due (the surf video projected on to the studio wall definitely helped set the mood). By the end, I even managed a headstand on my wobbly board. Is it as cool as real surfing? Obviously not. But it was a pretty spot-on replacement for when you can't get a water workout!

You've seen Pink's insane aerial performances, right? She's a great singer, but when you watch her Cirque du Soleil-style show, the only thing you can think is damn, no wonder her body looks that good. Which is why I wanted to try aerial yoga for myself. So, I gave it my best shot at Om Factory , where I took an advanced beginner course designed to teach you how to use the hammock for acrobatic-style balancing and beginner flips and tricks.

Guys, it was so. Much. Fun. I thought all my yoga experience had prepared me for the more acrobatic version, but when you add the aerial element into yoga, the difficulty level goes from child's pose to inversions in a nanosecond. Graceful, I was not. That said, it challenged my strength and endurance, as well as my ability to stay zen while hanging upside down. I may not have a career in the circus any time soon, but I've never had a bigger smile on my face throughout a workout. (P.S. - I left thinking, Pink did all that with a mic in one hand, too!).