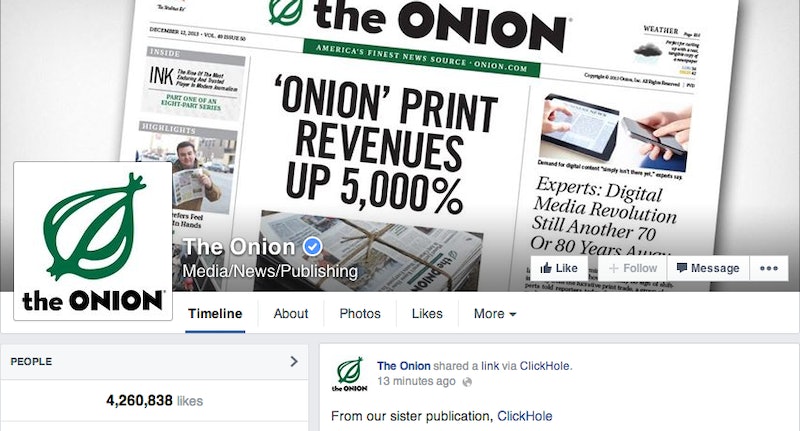 Get ready for a major paradigm shift: Facebook is testing a "satire" tag for stories your friends may have thought were actually news. And the tag isn't a minor thing that can easily be missed. Instead of just the normal headline, Facebook will display articles from satire sites with headlines like, for example, "[Satire] FDA Recommends At Least 3 Servings Of Foods With Word ‘Fruit’ On Box." On one hand, this will definitely kill any of the subtlety satire stands for. On the other, maybe you'll no longer have to be embarrassed that people with whom you associate actually think a 9,600-mile-long roller coaster is coming soon to a theme park near you.

The tag isn't super-pervasive right now. In fact, it can take some trying to actually find it. But after scouring my news feed for anyone who might have shared an article from The Onion recently, find it I did. Luckily for satire enthusiasts everywhere, the tag doesn't automatically show up every time a joke article passes your feed. But if you click through to read the original post, go back to your Facebook tab. Chances are, you'll see the tag appended to everything in the "Related Articles" queue, like so:

Is the fact that people sometimes believe that articles from The Onion (and other "news" sites) are real that big of an issue? Facebook sure seems to think so. According to Ars Technica, the tag test has been going for about a month now. A Facebook spokesperson told the site:

We are running a small test which shows the text "[Satire]" in front of links to satirical articles in the related articles unit in News Feed. This is because we received feedback that people wanted a clearer way to distinguish satirical articles from others in these units.

Although Facebook won't disclose what other sites the tag applies to, it's interesting that The Onion's sister site, ClickHole, continues to fly under the radar. Maybe figuring out what's satire is harder than executives think.

This could be viewed as hand-holding to an absurd degree; I can't be the only one who secretly enjoys watching people be gullible in public. But all is not lost! The tag, at least currently, only shows up when you click through to read the article itself, so Facebook doesn't murder the subtlety of the joke immediately. Someone who doesn't immediately get it will theoretically be fooled just long enough to get back to Facebook, at which point she'll, again theoretically, notice all the other satire tags and make the connection before making herself look like an idiot.

Or maybe no one will notice and the social-media schadenfreude will continue forevermore.