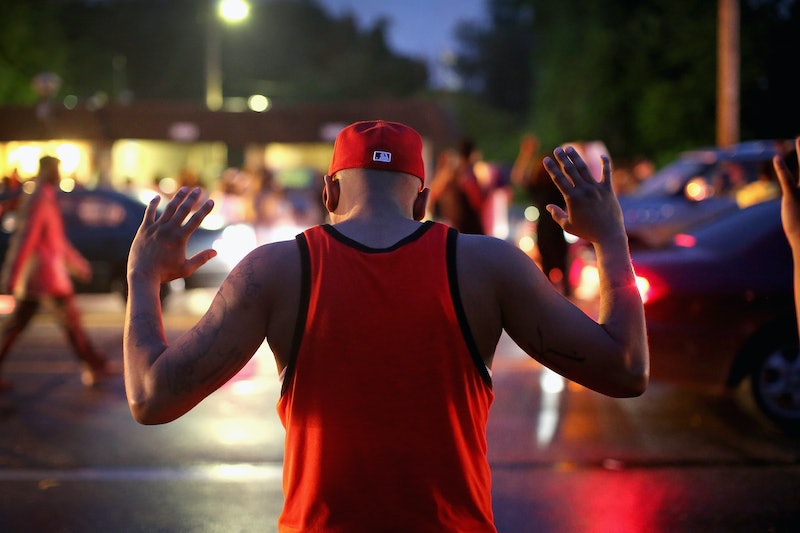 The shooting of unarmed 18-year-old Michael Brown in Ferguson, Missouri, struck a nerve among the American populace, and it struck hard. Shows of solidarity have emerged across the nation, and while Brown remains at the center of these protests, much of the heartbreak and frustration stems from a more pervasive and more insidious trend of seemingly racially charged police violence in the United States.

Over the past week, Ferguson has undergone a rapid transition from a small, midwestern town with a population of just over 20,000 to a "war zone," where police are now outfitted with military grade weapons, uniforms, and even armored vehicles. Recent photographs of heavily armed police marching with weapons raised against unarmed citizens have rendered Ferguson unrecognizable as a small outlet of middle America, and serve as a striking representation of the power disparity between the police force and civilians. And this disparity seems particularly apparent amongst the black population of the U.S.

According to the FBI's most recent accounts of "justifiable homicide," in the seven years between 2005 and 2012, a white officer used deadly force against a black person almost two times every week, which Melissa Harris-Perry pointed out in her passionate and touching tribute to Brown. Of those black persons killed, nearly one in every five were under 21 years of age. For comparison, only 8.7 percent of white people killed by police officers were younger than 21.

These numbers are likely underestimates, as police departments self-report these statistics, and only 750 of the 17,000 law enforcement agencies in the United States participated. According to University of South Carolina criminologist Geoff Alpert, to this day, there exists no national record of the number of civilians killed by the police — and of course, no complete racial breakdown of this information.

We've been trying [to get this information] for years, but nobody wanted to fund it and the (police) departments didn't want it. They were concerned with their image and liability. They don't want to bother with it.

And this comes as no surprise, given the appalling statistics associated with police violence and brutality, particularly along racial lines. As Mother Jones pointed out on Friday, Brown is at least the fifth unarmed black man to be killed by police in the past month. Eric Garner of Staten Island, John Crawford of Ohio, Ezell Ford of Los Angeles, and Dante Parker of Victoville, California, represent the other four lives lost at the hands of police.

The geographic diversity of these tragedies suggest that the problem is not centralized to one area of the country, but rather a widespread issue of concern. In 2007, a joint effort by ColorLines and the Chicago Reporter examined police shootings in the 10 largest cities in the U.S., and in every city, African Americans comprised a disproportionately large percentage of those killed.

The cities with the greatest racial disparity in these shootings were New York, San Diego, and Las Vegas — in each of these cities, the percentage of black people killed was at least twice that of their percentage of the city's population. This means that if these statistics remained constant in 2010, when the percentage of black people in New York City was 25 percent, a whopping 50 percent of those killed in police shootings would have been of African American descent.

Moreover, according to a 2008 Department of Justice Police Public Contact Survey, 74 percent of blacks felt that police used "excessive force" when dealing with them, a number much greater than that reported by either whites or Hispanics.

In Ferguson, where blacks outnumber whites two to one, they were arrested at a rate of eight to one during the first four months of this year. Nationally, African Americans are arrested three times more frequently than their white counterparts, although African Americans make up only 12 percent of the population. While two thirds of Ferguson is African American, the mayor and five out of six city council members are white, as are 50 of the 53 members of the police force.

Besides these police statistics, there's the vast discrepancy among the media's portrayal of the deaths and crimes of whites vs. blacks in the United States. Beyond the #IfTheyGunnedMeDown hashtag, which examines the types of pictures various outlets would choose to use when remembering victims of violence, there are also seriously skewed headlines.

For example, as the Huffington Post points out, when Eric Belluci allegedly murdered his parents in 2010, local media outlets ran this headline: "Son in Staten Island murders was brilliant, athletic — but his demons were the death of his parents." Conversely, when Trayvon Martin was shot and killed in 2012, NBC ran the following headline: "Trayvon Martin was suspended three times from school."

Whereas Belluci, a white suspected murderer, had his best traits displayed by the headline, Martin, a black shooting victim, was noted for his disciplinary issues at school.

Perhaps it's this disturbing trend that has reached a boiling point with the tragic death of Brown — and while protests around the nation were sparked by his shooting, they were fueled by the injustices of decades past.