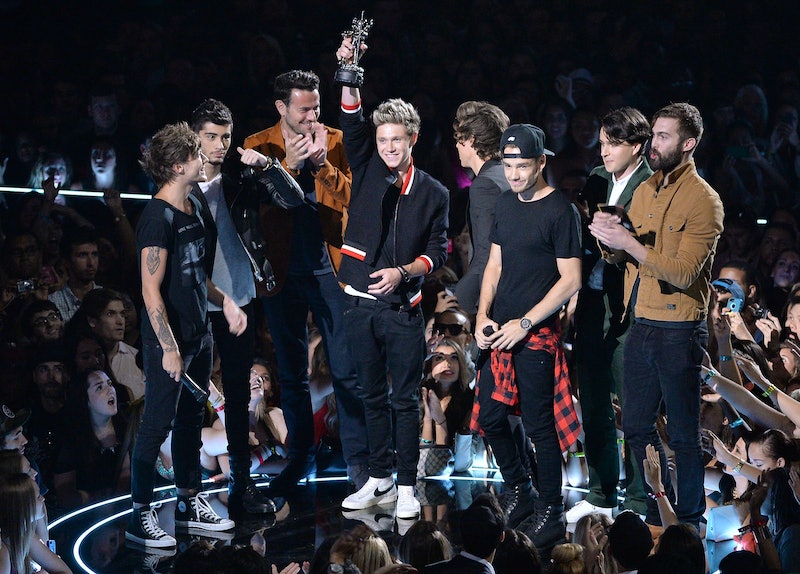 Winners of the Academy Award thank the Academy. Winners of the Golden Globe thank the Hollywood Foreign Press Association. But when winners of this year's VMAs take to the stage to collect their moonman statues, who do the winners thank? How are MTV's Video Music Awards decided?

Well, for starters, the VMAs are decided by... us. Or anyone who feels like taking the time to vote. Voting happened via text and on MTV.com, so you snooze, you lose, procrastinators (unless you want to vote for Artist To Watch, which will be open until Sunday). Open voting decides most of the major categories: Artist to Watch, Video of the Year, Best Lyric Video, Best Hip-Hop Video, Best Male Video, Best Female Video, Best Pop Video, Best Rock Video, Best Collaboration, MTV Clubland Award, and Best Video with a Social message.

That being said, there are six categories that aren't open to public voting. MTV calls these the "professional categories." They are: Best Cinematography, Best Editing, Best Choreography, Best Direction, Best Art Direction, and Best Visual Effects. These are decided by people in the industry who are actually experts in these fields, because the large majority of us probably didn't study film at an art institute. This means they'll vote based on actual technical accomplishments, and not just because they think 5 Seconds of Summer is cute. (Sorry, guys.)

I reached out to MTV to find out more about this secret voting body, and I got... nothing. MTV didn't respond to my request, so I can't tell you who votes on these technical awards, or even how many voting members there are. (I also asked about who decides the nominees for the rest of the categories, and didn't get a response about that, either.) Instead, you'll just have to imagine it's the same shadowy cabal that's behind everything else in the music industry.

But does it really matter? MTV doesn't televise the categories that aren't open to public voting. These categories just become a footnote to the bigger, splashier awards that are shown on TV.

I actually think that's a shame, because it is nice to look at music videos not as a fan, but through the eyes of filmmaking experts. There are some interesting choices mixed into those categories: Arcade Fire's "Afterlife," Beyonce's "Pretty Hurts," and Jack White's “Lazaretto," to name a couple.

It would be nice if the VMAs took the opportunity to shine a light on some of these lesser-known videos, and if the people who nominated them — or made them — had a chance to talk about what makes them worth watching.

Of course, it's a little too idealistic to actually want the MTV VMAs to actually be about the videos. It's more about the live spectacle for spectacle's sake. It would stop the momentum of the show to talk about the cinematography, editing, or direction of a music video. And I don't expect to gather around the coffee machine at my office the next day and gossip with my coworkers about who won the best choreography award. But I will probably look up who won these awards when I sit down at my computer afterward.

More like this
This James Bond Event At Abbey Road Studios Was A 007 Fan's Dream
By Samantha Rollins
The 'Love, Lizzo' Harry Styles Scene Is Just 1 Moment That Made Fans Feel Seen
By Brad Witter
Christine McVie Dies At 79 & Fleetwood Mac Reacts With Touching Tributes
By Radhika Menon
Adele Freaks Out After A Fan Used A Filter On Their Selfie At Her Show
By Radhika Menon
Get Even More From Bustle — Sign Up For The Newsletter