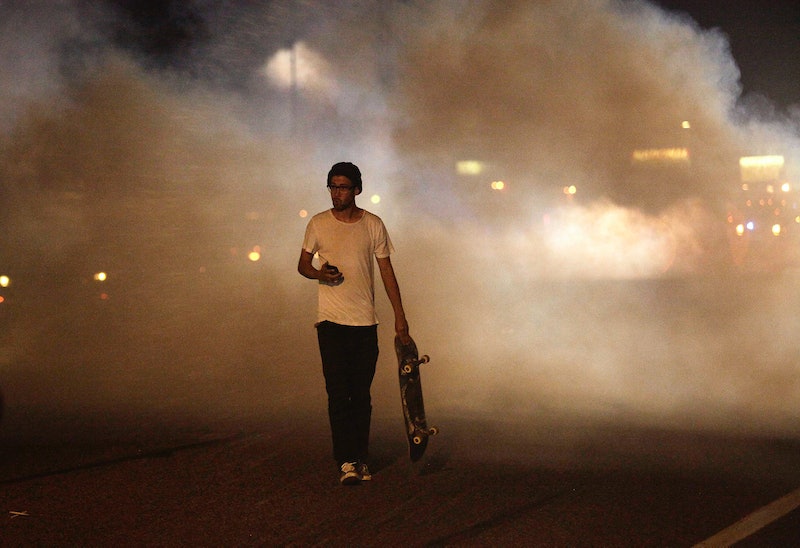 If you're anything like me, you've been more or less glued to your computer or tablet device over the last nine days, trying to keep on top of what's going down in Ferguson, Missouri. Since the shooting death of 18-year-old Michael Brown on Aug. 9, the city has descended into a cycle of upheaval. So what can you do to support Ferguson?

The unfolding situation has led to a deep sense of helplessness for many people — sympathetic observers of the plight of the Ferguson protesters, unsure what they can do to help. And indeed, it's hard to know exactly how to lend your support — is there some place to donate? Some cause to get behind? A hashtag to Tweet?

At the end of the day, if the St. Louis-area forces descending on Ferguson aren't proactive in addressing the outcry for justice, tensions are likely to remain high. Luckily, there are some things you can lend your name to, or some ways to contribute a little cash that can make a difference. Here are a handful of examples. (Note: For an updated list of ways to help Ferguson following charges being dropped against Darren Wilson, you can go here.)

The Change.org Petition on Police Misconduct

This has been swirling around since pretty early in the Ferguson fracas, launched by Los Angeles-based Shaun King, who's been a tireless presence on social media throughout the protests. It currently has over 200,000 signatures, which is a healthy total, but far short of its goal of one million.

While it's ultimately up to you to decide whether the petition's call is worth supporting, I'll say this much: The ideas contained make a lot of sense to me, and I think it's worth the consideration of anyone concerned with police violence and misconduct, especially against minority populations. Its provisions are stated as follows:

1. The shooting and killing of an unarmed citizen who does not have an outstanding warrant for a violent crime should be a federal offense.

2. Choke holds and chest compressions by police (what the coroner lists as the official cause of death for Eric Garner) should be federally banned.

3. All police officers must wear forward-facing body cameras while on duty. They cost just $99 and are having a significant, positive impact in several cities around the United States and the world.

4. Suspensions for violations of any of the above offenses should be UNPAID.

5. Convictions for the above offenses should have their own set of mandatory minimum penalties. The men who killed Diallo, Bell, Grant, Carter, Garner, and others all walk free while over 1,000,000 non violent offenders are currently incarcerated in American prisons.

Not too bad, huh?

Feeding the Children of Ferguson

The children of Ferguson haven't been shielded from the destabilizing impacts of the protests and police response. That was laid especially bare on Sunday, by images of a teargas-stricken child that lit up social media — in his post-curfew press conference, Capt. Ron Johnson wholly sidestepped a question on underage teargas victims.

While you may not be able to help as much as you'd like, there's one easy way to make your dollars felt — donate to help keep the kids fed. As the effort's creator Julianna Mendelsohn explains, the upheaval has resulted in public school cancellations, which leaves those kids who rely on their school lunches high and dry.

When I found out school had been canceled for several days as a result of the civil unrest, I immediately became worried for the students in households with food instability. Many children in the US eat their only meals of the day, breakfast and lunch, at school. With school out, kids are undoubtedly going hungry. ALL OF THIS MONEY WILL GO TO FEED KIDS IN FERGUSON. ... Regardless of your opinion on the civil unrest in Ferguson, there is no need for innocent children to go hungry because of it.

The campaign has generated greater than $50,000 in donations to the Greater St. Louis Area Food Bank so far.

Donate Directly to the Brown Family

You can also decide to give some dollars directly to the grieving family that Michael Brown left behind. A GoFundMe page has been launched by the family's legal representation, from the office of attorney Benjamin Crump, whose name you may recognize — he also represented the family of slain Florida teen Trayvon Martin last year. What will the money go towards?

The funds collected here will be used by the Brown family to cover funeral and burial expenses, travel and living expenses of the parents as they seek justice for their son, Michael Brown, Jr.

Becoming embroiled in a full-time, high-profile controversial incident like this isn't easy on its own, much less when you've also had your son taken from you. The page has already netted greater than $67,000 for the Brown family in just four days, rapidly approaching its total goal of $80,000.

The folks with the National Lawyer's Guild (NLG) have been maintaining a presence on the ground, offering legal support and oversight, but such a job is neither safe nor free — they're accepting donations to keep a presence in Ferguson.

Having legal observers on the ground is pretty important in the interests of justice, as chaotic as the nights in Ferguson have routinely become. Any violations of protesters' rights could easily go overlooked if there aren't dedicated people following the action.

Some news junkies across the country have been dubious, to say the least, of some of the reporting coming out of the Ferguson area. This is understandable, given the tack the police have taken with journalists and protesters, and the manner in which they released troubling surveillance footage of Brown while withholding almost all information about his actual shooting.

Supporting independent media is a worthy cause in this regard, if you have any concerns about establishment bias in reporting from major outlets. You may not, to be fair, but many people (myself included, in the interests of full disclosure) do.

Berkeley-based independent black media outlet This Week in Blackness is a prominent example — founder Elon James White and company reported from Ferguson late last week, and the situation has remained so severe that they're headed back out there Monday.