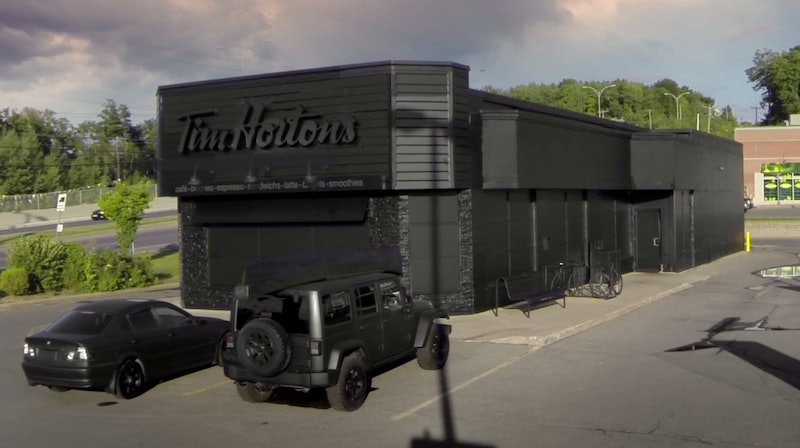 Something spooky fell upon a Tim Hortons location in Canada. No, they weren't celebrating Halloween early or commemorating Britney Spears's 2007 album Blackout. The Tim Hortons blacked out a Quebec storefront in a stunt to introduce their new dark roast coffee blend. Now that's what I call an immersive marketing experience — let's just be glad that people were plunged into darkness and not the piping-hot dark roast itself.

Tim Hortons customers were surprised to find that their local franchise was completely decked out in black-out material — the lights were turned off, windows were opaque, and there were even similarly tinted cars sitting in the parking lot. It was like a scene out of an alternative-universe version of the already warped Pleasantville . Those who were brave enough to enter the shadowy fortress were greeted by a figure wearing night-vision goggles who helped lead the blind to a counter where they figured out the gimmick as they were handed a cup of the new dark roast. Dark roast, total darkness, get it? The lights-out approach was also a ploy to heighten patrons' senses by taking away their ability to see. Although walking through a pitch-black donut shop sounds like a total terror to some, it's nothing compared to that one time zombies grabbed at New Yorkers feet. I guess Canadians are a little nicer with their approach.

This isn't the first time the company has gone super creative for a publicity stunt. Back in May, the original Tim Hortons was revived for its 50th birthday. The event was complete with old school outfits, the first doughnut recipes and some of the original workers who reminisced about the '60s. Talk about a throwback.

One patron in the video even says he's going to be back the next day to get more of the new roast — let's just hope he doesn't have to put up with the gimmick again just for a cup of coffee. Check out the video below:

More like this
Starbucks Released New Menu Items For The Summer
By Emma Garza
A Beginner's Guide To Drinking Whiskey
By Alexis Morillo
13 Summer Solstice Quotes To Celebrate The Longest Day Of The Year
By Sadie Trombetta
The Summer Solstice Spiritual Meaning, Explained
By Jessica Booth and Brittany Beringer
Get Even More From Bustle — Sign Up For The Newsletter