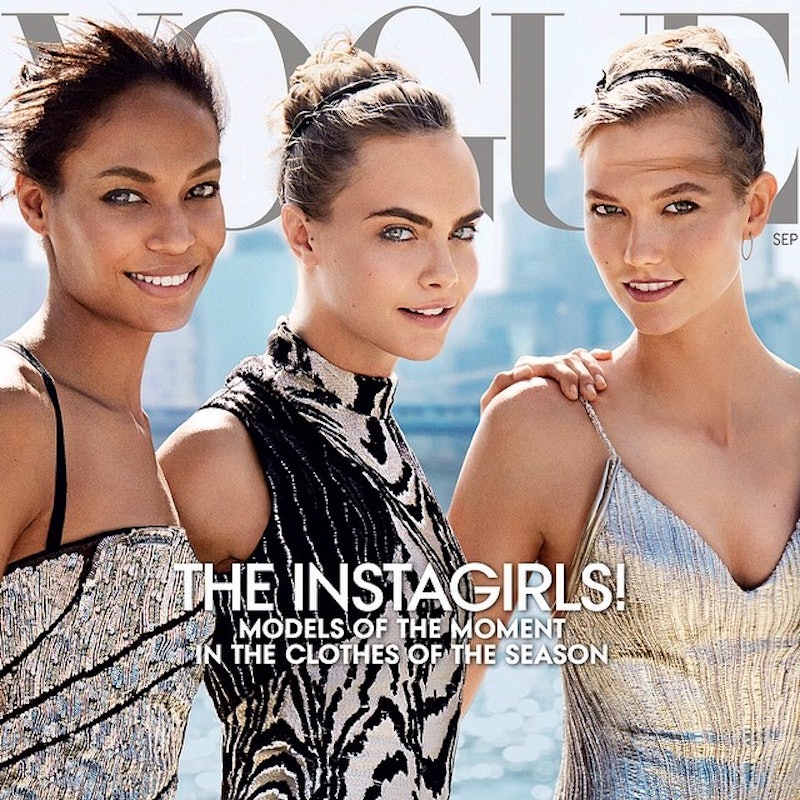 Last week we were finally graced with the highly coveted September cover of Vogue . It's no secret that Vogue keeps that issue's cover under wraps until the very last minute, so when we finally got a look at the hidden treasure, it was quite a surprise to see three (super popular, celebrity-level) models staring right back at us. The issue sports a fold-out cover, however, revealing nine total models that can claim having a famed Vogue September cover. Also this week, we were introduced to Forbes' list of the highest-paid models in the industry right now. So my question: Do any of the models make both lists?

Joan Smalls, Cara Delevingne and Karlie Kloss lead the cover, remaining on the front even when it is fully folded. They are accompanied in the pull-out by Arizona Muse, Edie Campbell, Imaan Hammam, Fei Fei Sun, Vanessa Axente and Andreea Diaconu. These models are certainly the face of the latest wave of modeling, and are a departure from some of the magazine's previous September cover models, like 2013's Jennifer Lawrence and 2012's Lady Gaga. This year, we see recognizable, but not hyper-famous, faces, styled simply with little to no makeup and elegant evening gowns.

But are these women raking in cash as much as they'll rank in publicity following the cover? Kloss is the highest paid model that also appears on the cover — T-Swift's BFF makes about $4 million a year. Delevingne is next, making $3.5 million. Joan Smalls, the final cover girl that made the list, makes a cool $3 million. Is it a coincidence that these three were selected for the very front? Probably not. And adding the September cover to your resume will likely only help those salaries rise.

More like this
Dua Lipa On YSL Beauty, Plus Her Fearless Approach To Hair & Makeup
By Erin Stovall
Rita Ora’s Sheer Dress & Mermaid-Inspired Prosthetics Stun At British Fashion Awards
By Sophie McEvoy
The 12 Trendiest Nail Polish Colors To Wear In 2023
By Olivia Rose Ferreiro
8 Nail Art Trends That Will Be Everywhere In 2023
By Jordan Murray
Get Even More From Bustle — Sign Up For The Newsletter