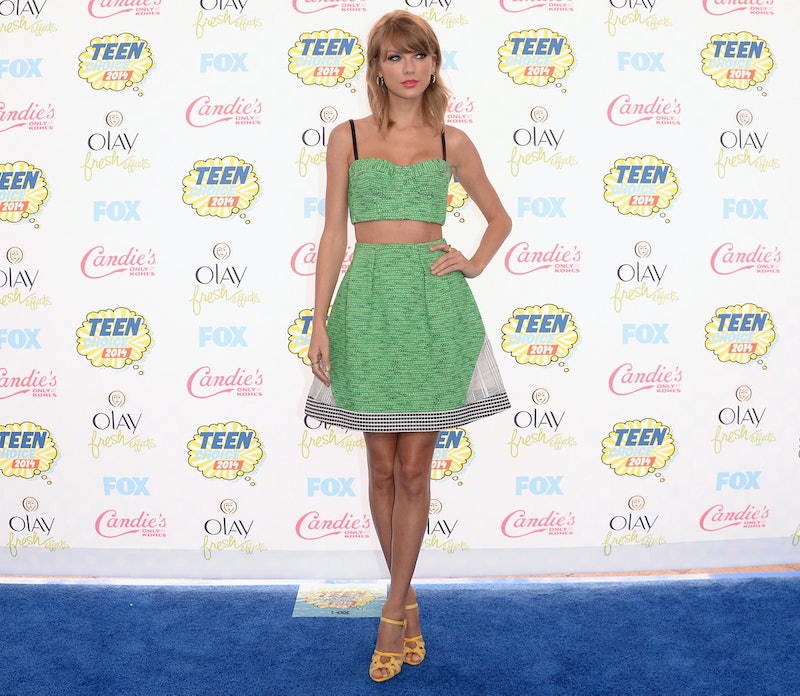 On Monday, Taylor Swift's Worldwide Live Stream with Yahoo went off without a hitch. The 24-year-old singer, dressed in a white crop-top and white skirt, revealed to the universe that her first single "Shake It Off" is off her new album 1989, which will hit stores on Oct. 27. That's soon, you guys! And not only was Swift kind enough to drop those details, but she was also generous enough to drop a full-length video for "Shake It Off." This is a woman who loves her fans . . . and understands the art of awkward dance moves.

While introducing her new video on the Live Stream, Swift tells a familiar tale. When you're at a house party, the "too cool for school kids" who are making fun of the nerds, or the free-spirits, or whoever else might be dancing, aren't having as much fun as those who, you know, are shaking their groove thing. We all know that Swift's been made fun of for her awkward awards show dancing, so, hmm. Did we just get called out?

And more points should be thrown her way, too, because the video is darn good. Spliced between gorgeous shots of professional dancers dancing to "Shake It Off" are visuals of our girl Swift trying to keep up. She's poking fun at bad dancers in the best way possible. Bad dancers are the ones having the fun, after all! The rest of us are just haters. And as "Shake It Off" says . . . haters' gon' hate, but Swift is just going to keep cruising, keep grooving.

Four for you, Taylor Swift. You go.