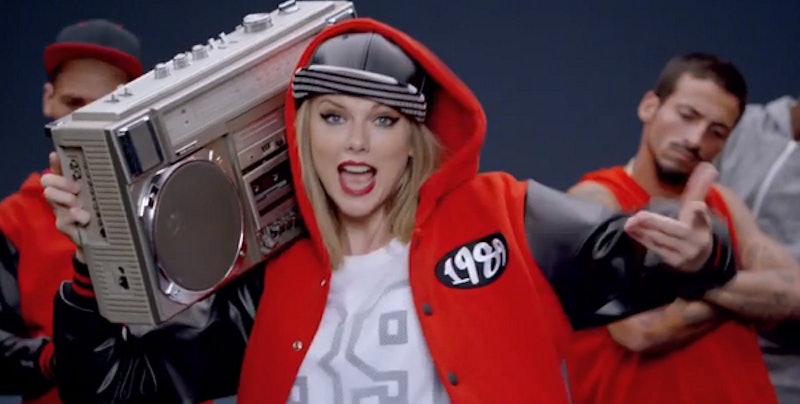 Whenever a Taylor Swift music video is released, media and fans immediately latch onto her lyrics, delving into meaning and backstory of every word. And, when it comes to Swift's new single "Shake It Off," things are no different. Is the song and accompanying music video — featuring Swift's famous awkward dance skills — taking a shot at us, the viewing public who regularly poked fun at the pop star's jaunty moves during awards shows? When she refers to her too many dates, what dates is she referring to?! (Okay, that's also a shot at us too, but we have to speculate about her love life somewhere, right? It is a Taylor Swift song!) But when Swift releases a music video, there's something else we have to inspect as well: "Shake It Off"s fashion.

After all, the singer sports plenty of different looks throughout the 4-minute video, packing in a total of 11 dance-inspired outfits. Unfortunately, there are a few that one would definitely want to, well, shake off if given an opportunity to wear them. But how do all the looks shake down? Which of "Shake It Off"s looks are downright embarrassing... and which are you sort of embarrassed to admit you want in your closet right now? (Eh, who am I kidding — no shame here. I'd kill to have Taylor Swift's fashion sense. And cat.) Let's rank the "Shake It Off" looks!

One part Daft Punk, one part Metropolis , and just a little too many parts Joey King from Zach Braff's Wish I Were Here. Next.

An ombre dress with an ombre rhythm gymnastics ribbon to match? In the name of Frank the Tank, now we're getting somewhere.

Gwen Stefani might have already done the red-lipped cheerleader to death in "Hollaback Girl," but there's just a slight enough hint of Toni Basil's "Mickey" to make this look commendable.

Of course Swift's the white swan. But though the performance-ready tutu doesn't quite work when clasped around someone so clearly lacking in ballet skills (#BallerinaRant)...

...Being able to hide that lack in ballet skills with clever choreography immediately improves the look. Eat your heart out, black swan.

But not as sold as I am with this Beatnik-inspired number, which is anything but square.