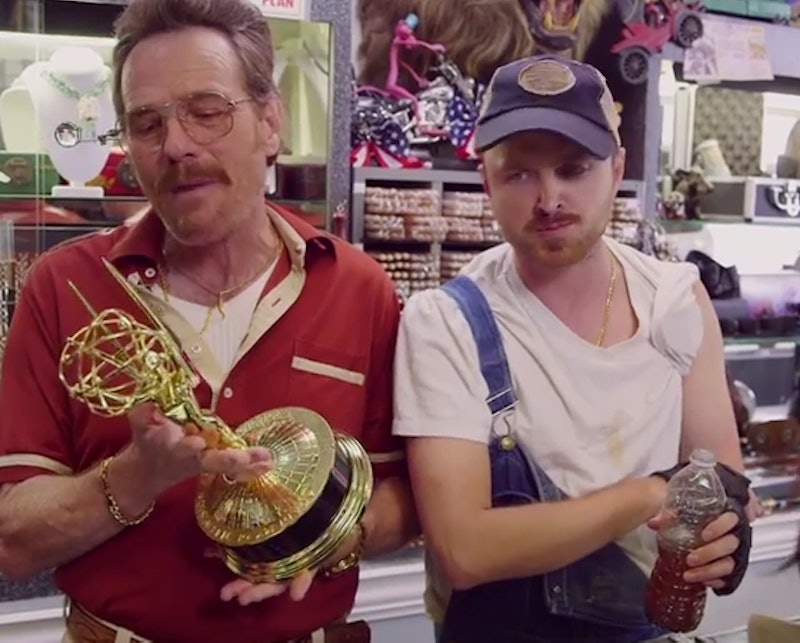 They've reunited, bitch. You must, must, must, must watch Bryan Cranston and Aaron Paul in the mock-reality show Barely Legal Pawn , brought to you by The Television Academy. It's the Emmy promo to end all Emmy promos, as Cranston and Paul play two pawn shop owners that receive a visit from the one and only Julia Louis-Dreyfus, who is seeking to sell her Emmy since she needs some money. She drunkenly bought an island online. (Ah, the things wine will make a girl do.)

Dreyfus chats with Cranston and Paul's characters who struggle to decide if her Emmy — for best Supporting Actress in A Comedy — for Seinfeld, no less, is worth anything. It's a little meta, especially when Dreyfus and Paul discuss the importance of a supporting role, and it also gives the Emmys a chance to say how even comic actors work hard, too, without being super didactic and PSA-y about it. And at the end of the short video, sponsored by Audi of America, you'll even see a Breaking Bad reference, since Cranston and Paul are operating a secret business behind their pawn shop — and no, it's not meth lab, but you've gotta see what it actually is. Hint: It warrants Paul to utter Jesse Pinkman's signature phrase.

Cranston and Paul make for an excellent comic team, and it's awesome to see them back together and not on the cusp of death. Who knew Emmy promos could be this good!??!