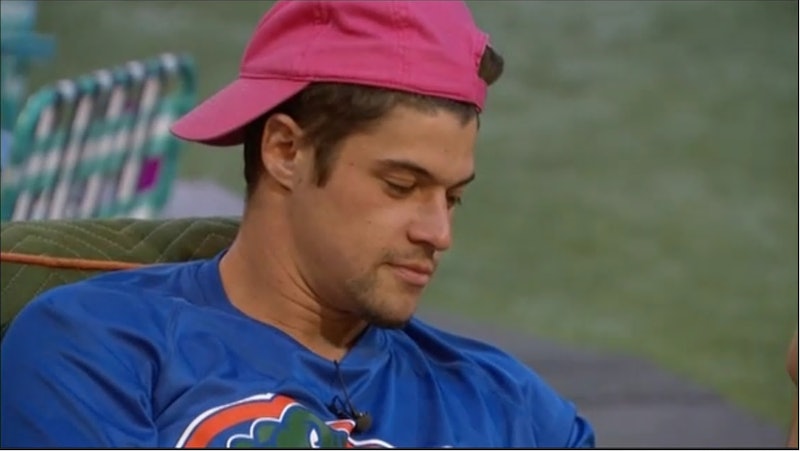 I was pretty excited to hear the term “Zach Attack” being used in the Big Brother house this season for two main reasons. 1) It reminded me of Zack Attack, the fictional band of Saved by the Bell that sang the really catchy tune, “Friends, Forever.” And 2) I knew that there was an unpredictable houseguest who was bound to do something completely shocking at least once this season. Well, I wasn't disappointed in the latter of those two options, as Big Brother 's Zach became a wildly unpredictable houseguest this season, which is ultimately what might get him evicted on Thursday.

Before Frankie (yes, that Frankie) nominated Zach for eviction, it seemed like everything I thought I knew in this world (love, friendship, etc.) was going to be completely blown up. I couldn’t possibly know anything to be true if I had thought Frankie was a loyal friend to Zach. But, I did knowthat Zach wasn’t going to be nominated without a fight, which could be why he took to the storage room to read the Big Brother rule book, to see if there was anything he could or couldn’t do to liven up his potential last few days in the house.

And while we don’t know exactly what Zach was looking up, or what he might have planned for the live show, it doesn’t mean we can’t guess. Here are a few potential things Zach might have planned before meeting with Julie Chen on Thursday.

Apparently there is a rule stating that the HoH cannot reveal to a replacement nominee that he or she is going up on the block. It feels like this rule has been broken about 20 times this season already, but if it is Zach’s last ditch effort to stay in the house, he could be waiting to bring it up.

He is going to yell at the houseguests (duh)

Zach has been known to volunteer himself for yelling at someone, and he has also been known to give pretty weak (and by weak I mean poetic) pleas to the houseguests before they vote to evict. Because he is in actual danger this week, I wouldn’t be surprised if the wrath of Zach came out during the live vote to evict and he started yelling at everyone, exposing all of the secrets that are left to be told (which thanks to him, are like two).

If Zach leaves, he has the opportunity to return to the house the same night if he can beat the other three jury members for a chance to be revived in the game. It is possible that Zach has been looking through the rule book for information about the potential buy back to learn what he needs to know if he does get the chance to return to the game.

After Team America stole all of the houseguests items for their mission this week and hid them so no one could find them (Cody found them…) all eyes were on Zach for being the reason they went missing. Obviously, Team America stayed quiet about this, but Frankie kept pushing the houseguests to believe that Zach was actually the saboteur (a twist from past seasons) and getting paid to wreak havoc in the house. Because the houseguests believed Frankie, they were saying Zach was going to be evicted because he is the saboteur. Zach, who is not behind the stolen items, might have been looking for a rule that doesn’t allow him to be accused of something he didn’t do, ultimately leading towards his eviction.