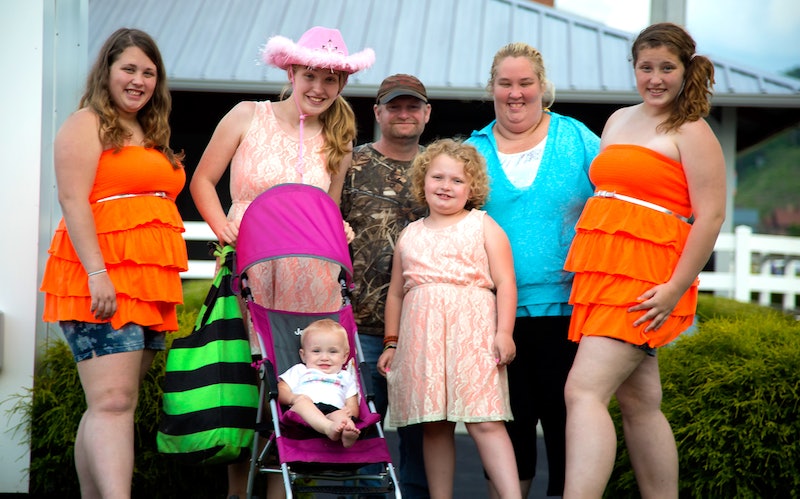 You can be forgiven if that headline caught you off guard. "Honey Boo Boo? The obese grade-schooler with the obese mom and an exceedingly questionable take on Italian dining with that…sketti they make? Progressive, sure. What are you, a TLC plant?" I'm not going to argue with you that Here Comes Honey Boo Boo isn't bursting at the seams with some of the more (non-violent) disgusting things you might see on TV. There's nothing sanitary about a butter slip-n-slide, no matter how fun it looked. Eating contests, likewise, are rarely recommended by licensed physicians. Many Americans -- many of them critics -- consider HBB to be a dire harbinger of our culture's end times. I myself have been less than cordial in past assessments. On a surface level HBB is "progressive" the way Farrah Abraham is "a mom."

But hey -- holster that judgment for a second and listen up, now! Underneath the objectively foul family pastimes and parenting choices that would make Dr. Spock kill himself, HBB brims with a surprising social conscience. (I mean you've got to look DEEP, but it's there.) Herewith, five ways in which this bizarre little program stakes its claim to the issues of the day:

1. Family's whatever you make of it

Fifty years ago television offered a clear vision of the American family: two kids, dog, white, sparkling. The Thompsons share the same race as the Cleavers, but the other benchmarks -- five kids (from different fathers and generations), chickens, and Pigpen-level dirty -- couldn't be more different. And you know what? Along with Modern Family's Dunphy clan, The Thompsons are probably the most representative modern American family on TV.

Sugar Bear, in particular, chose to be a part of this makeshift family unit. Just one of the girls (Alana) is actually his, but he's so committed to the rest that he three times asked Mama June to marry him and make their family "complete." Jury-rigged though it may be on chicken wire and bacon grease, the Thompson clan has forged something special.

3. Roadkill isn't a waste; it's an opportunity

These are economically volatile times in which we pray for the best, but often expect the worst. And when the worst comes, wouldn't you be better off having done something to prepare for it? Like gutting and rationing a ran-over hog?

The Thompsons don't leave those carcasses to rot in the road; they clean and cut them up before storing them in the fridge or freezer, the same way you or I would some unused chicken breasts. And here's the thing -- why not? I ask that having never eaten honest-to-god roadkill myself, but if I consider the three second rule as at least tangentially related...then there's no reason for any of us to judge.

You too can have an entire room filled with toilet paper if you just learn how to navigate a crazy coupon binder!

This point is not so much about farting as it is gender equality, but flatuence is the lens through which we understand most of HBB's politics. When we think of farting in "polite" society, who's doing it? MEN. But in MacIntyre, specifically under the Thompson roof, farting is something that both men and women do with equal verve. And, let's get get real, the girls fart like the goddamn Klumps.

There's more! Alana and her family were introduced to us first on Toddlers & Tiaras, a show absolutely in the business of reinforcing gender stereotypes. Since then Alana has not so much given that up (she's still partial to ballet classes and dolls) as she has expanded our understanding of what girls can be. She's into professional wrestling. She helps plan go-kart birthday parties. It's not "girl" or "boy" when it comes to...anything the Thompsons do. They're just equal partners in bizarro hedonism.

More like this
Jake Daniels Just Became The UK’s First Active Football Player To Come Out As Gay Since 1990
By Sam Ramsden
Simply Sayo Doesn’t Consider Kpoetry Hard Work
By Jessica Morgan
'Heartstopper's Kit Connor Called Out Twitter For Making Assumptions About His Sexuality
By Nola Ojomu
Everything To Know About A Potential 'Love On The Spectrum U.S.' Season 2
By Gretchen Smail
Get Even More From Bustle — Sign Up For The Newsletter