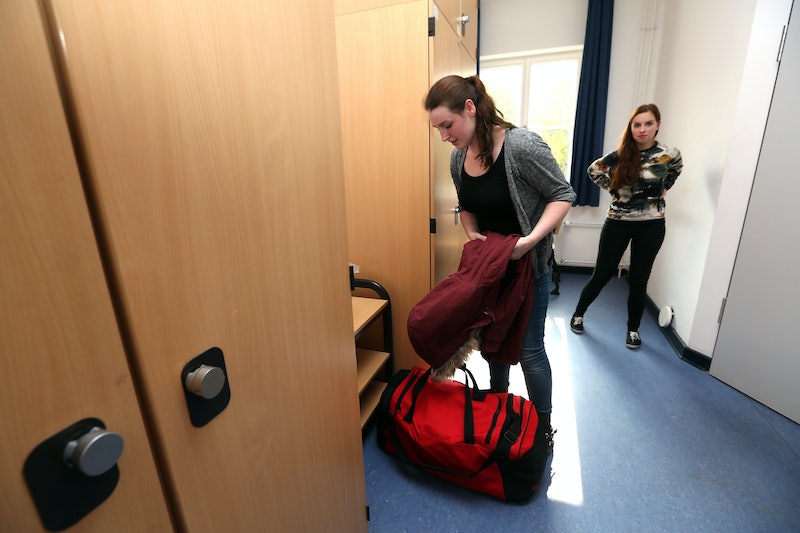 The topic of freshman year roommates is always fraught — but thanks to a lot of new advancements in recent years, college roommate selection seems to have considerably less drama than it used to. A piece currently running on Rolling Stone talks about the types of apps that have arisen in recent years to enable easier, smoother roommate selection process; Even though it’s been 11 years since I started my first year of college, I really wish these tools had been around then. Here’s why I think they’re such an awesome idea.

According to the magazine, the app RoomSync, which we previously covered here on Bustle, is used in more than 60 schools nationwide. It allows incoming freshmen to choose their own roommates in a Tinder-like format, and there’s evidence that the solution is a good one. Julie Weber, New Mexico State’s director of housing, told the magazine that the percentage of students who ask to switch roommates has dropped from 50 to 10; additionally, the GPAs of RoomSync users are .25 higher, and their re-enrollment is up 6.6 percent.

Not everyone, though, is convinced that RoomSync and other programs like it are a good thing; a huge number of schools still pair their freshman roommates by hand. For example, NYU’s head of housing, Thomas Ellett, said to Rolling Stone, “Education is about putting people in uncomfortable situations so they start to learn about themselves. [Programs like RoomSync] are a good customer-service tool, but there’s a big difference between customer service and education.”

But I disagree for a few reasons. First, it makes me wonder what those college roommate questionnaires the office of residential life usually makes incoming freshmen fill out are actually for. I was under the impression that they were meant to help pair people with relatively similar living habits together; statements like Ellett’s, however, make me think that they could even be used to purposefully pair people with dissimilar living habits. OK, so it's probably not that insidious... but it still seems kind of like an unnecessary hardship to throw at kids who are already having a hard enough time adjusting to life away from home, university-level classes, a new social scene, and so on.

Second, speaking as someone who had an incredibly mismatched roommate at the beginning of my freshman year, there’s also a difference between being put in an uncomfortable situation for learning purposes and being sabotaged. And it’s not just about personality, general interests, or likes and dislikes; it’s about what happens when your living habits diverge so dramatically with the person you’re matched with that it starts impacting your health and your studies. Schools don’t have a responsibility to match roommates who will end up being BFFs; I would argue, though, that they do have a responsibility to ensure that their students have stable enough living environments to be able to function both in class and out.

A personal anecdote: My freshman year of college was the year I moved to New York City. The roommate the office of residential life had paired me with, meanwhile, had actually grown up in the city; her family lived about 20 blocks away from school. For the entire first month, she didn’t spend a single night on campus. Now, I don’t know the whole situation; she might have had some stuff going on at home or other baggage that she needed to work through, and that’s fine. It’s hard, though, to get to know someone who’s never around. It’s also not terribly fun that first night on campus to think that everyone is probably bonding with their new roommates… except you, because yours isn’t there.

Then, when she did finally start spending nights on campus, our living habits couldn’t have been more different. I had a packed schedule — five classes and a stage management position in a departmental theatre production — and was up early and either at class, doing homework, or at rehearsal until 10 or 11 p.m. My roommate, however, was generally a night owl; she liked to talk on the phone in the room in the wee hours of the morning; she had a boyfriend she’d bring over without warning; and no matter how many polite conversations I tried to have with her about keeping the phone conversations in the hallway after midnight or giving me a little advanced warning before her boyfriend spent the night, ultimately the arrangement just didn’t work.

My packed schedule combined with never getting more than a few hours of uninterrupted sleep wasn’t a “learning experience”; it was a health problem. I was literally falling sleep during my morning classes — and I could even track exactly when it happened based on what my class notes looked like on any given day. My brain and body struggled to keep writing even when they were both essentially shutting down; my notebooks for that semester are full of thoughts trailing off mid-sentence, words devolving into scribbles, and more. And from my roommate’s perspective, I’m sure I was that annoying girl who goes to bed early (even though I’m not sure I’d call midnight “early”) and wakes up early every day — also not fun if you thrive on the opposite kind of rhythm.

It’s not my roommate’s fault that I had an ambitious schedule; it’s also not either of our faults that some other random person who didn’t know either of us matched us together. And to be fair, we did try to work it out; at the end of the day, though, what we both needed out of our living environment wasn’t going to happen with us cohabiting the same small space. So at the end of October, we applied for a room swap, and I moved in with a girl down the hall I knew from my archery class (archery as a PE requirement, by the way? Awesome). We weren’t best friends, and we’re not really in contact anymore; we did, however, cohabit quite well for the remainder of the year.

With something like RoomSync, a mess like mine — and those that are considerably worse — can be easily avoided. Plus, what’s not to say that choosing your own roommate isn’t a “learning experience?” As Julie Weber told Rolling Stone, students who use RoomSync can’t blame the office of residential life for their roommates. While it may not teach the “lessons” living with a total stranger chosen by someone else for you does, it does teach you to deal with the consequences of your own choices. And that, as they say, ain’t nothin’.