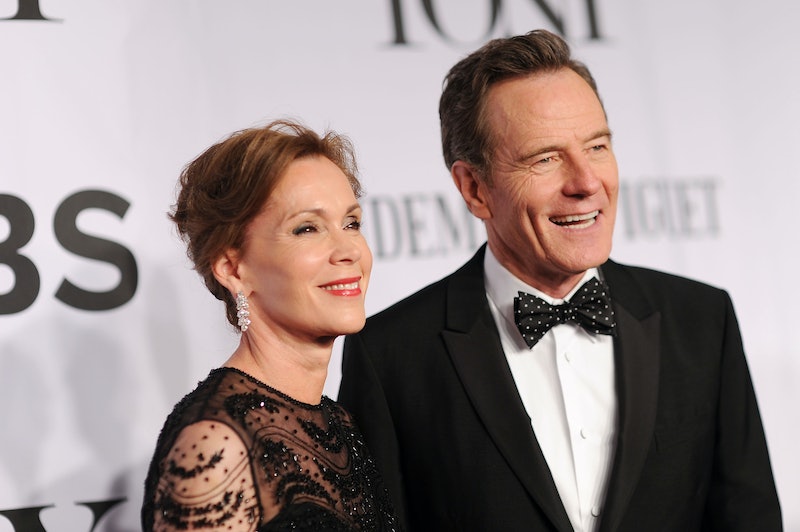 Despite the fact that he played one of the most despicable (albeit interesting and somehow still somewhat sympathetic) characters on the ridiculously popular television show Breaking Bad, Bryan Cranston has successfully become one of the most beloved actors in the game, and his portrayal of character Walter White is certifiably iconic. Who didn't love watching him tear Jesse Pinkman a new one or hide his meth lord status from DEA agent brother-in-law Hank? Of all the interactions that really stood out, though, some of the most memorable are when Walter clashed with his wife, Skyler. While I'm sure some Skyler supporters exist, she was really just the worst. Has a wife ever been so annoying? So miserable? Plenty of characters met their untimely, and usually grisly, demise throughout BB's five seasons, but somehow the horribly unlikable (like, Joffrey-level unlikable) Skyler managed to escape relatively unscathed. Well, physically, at least. In real life, however, Bryan Cranston's wife, Robin Dearden, isn't nearly so bad. In fact, their marriage seems pretty damn adorable.

Cranston was married to writer Mickey Middleton from 1977 until their divorce in 1982, after which he met Dearden, an actress, on the set of 80s TV show Airwolf. The two were married in 1984, which makes their relationship practically ancient (and a miracle, to be honest) by Hollywood standards. 30 years is no 72 days, amirite Kim?! The pair also have a daughter, aspiring actress Taylor Dearden, who was lucky enough to appear as an extra in Breaking Bad as "Sad Faced Girl." Talk about the role of a lifetime. Fun fact: Dearden was in the same episode as "Emotional Woman." Guess dramatic prowess runs in the family.

Though Cranston's marriage to Dearden is kept pretty private, they were photographed by Brandon Stanton, who runs the massively popular photo blog "Humans Of New York," when they attended the 2014 Met Gala together in May. Cranston took the opportunity to settle anyone's doubts of whether or not their marriage is anything like Walter and Skyler's. Stanton asked him,"What's your favorite thing about her?" To which Cranston (dreamily) replied, "She still gets giddy when she sees a firefly."