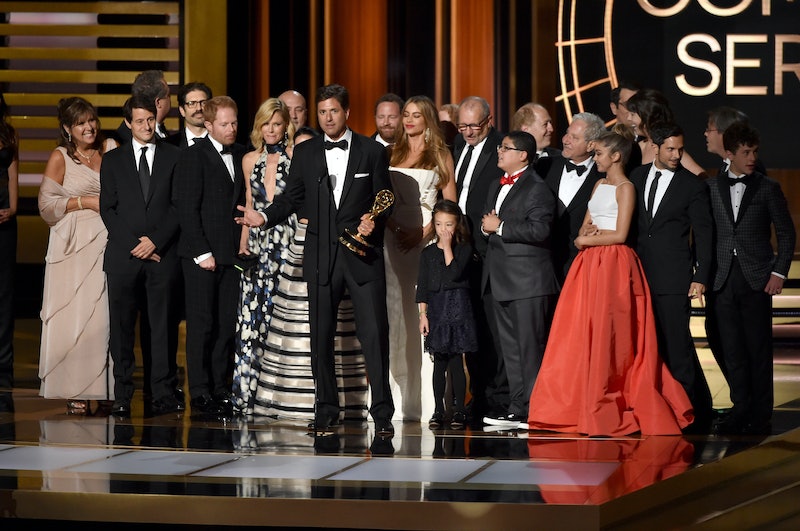 There's going to be a lot of crying at Litchfield tomorrow: Modern Family has won the Emmy for Best Comedy Series, besting Veep, The Big Bang Theory, Silicon Valley, Orange Is the New Black, and Louie for the genre's top prize. The honor comes as a surprise, even though Ty Burrell took home the trophy for Best Supporting Actor earlier in the night. Despite victories for OITNB star Uzo Aduba at the Creative Arts Emmys and Veep's Julia Louis-Dreyfus earlier in the night, it seems that Modern Family's hold on Emmy voters just won't let go.

Orange was the expected winner for its category, but it faced close competition from both Veep and Modern Family. The latter show has won the Emmy every year since 2010, and while its most recent seasons haven't had the same momentum as its early years, it's clearly still a voter favorite. Veep is a newer show, but it's racked up major acclaim in the past few years; it wouldn't have been a huge surprise if it managed to snag Best Comedy, especially considering how much its lead actress, Julia Louis-Dreyfus, is loved by Emmy voters.

Once again, though, Family wins.

Accepting the award, creator Steve Levitan said, "It's a wonder we get to be up here when there are so many deserving shows," and frankly, I agree. Family may be a ratings juggernaut and a family-friendly show, but considering the brilliance of the other shows in its category, it was frustrating to see it eek out yet another win.