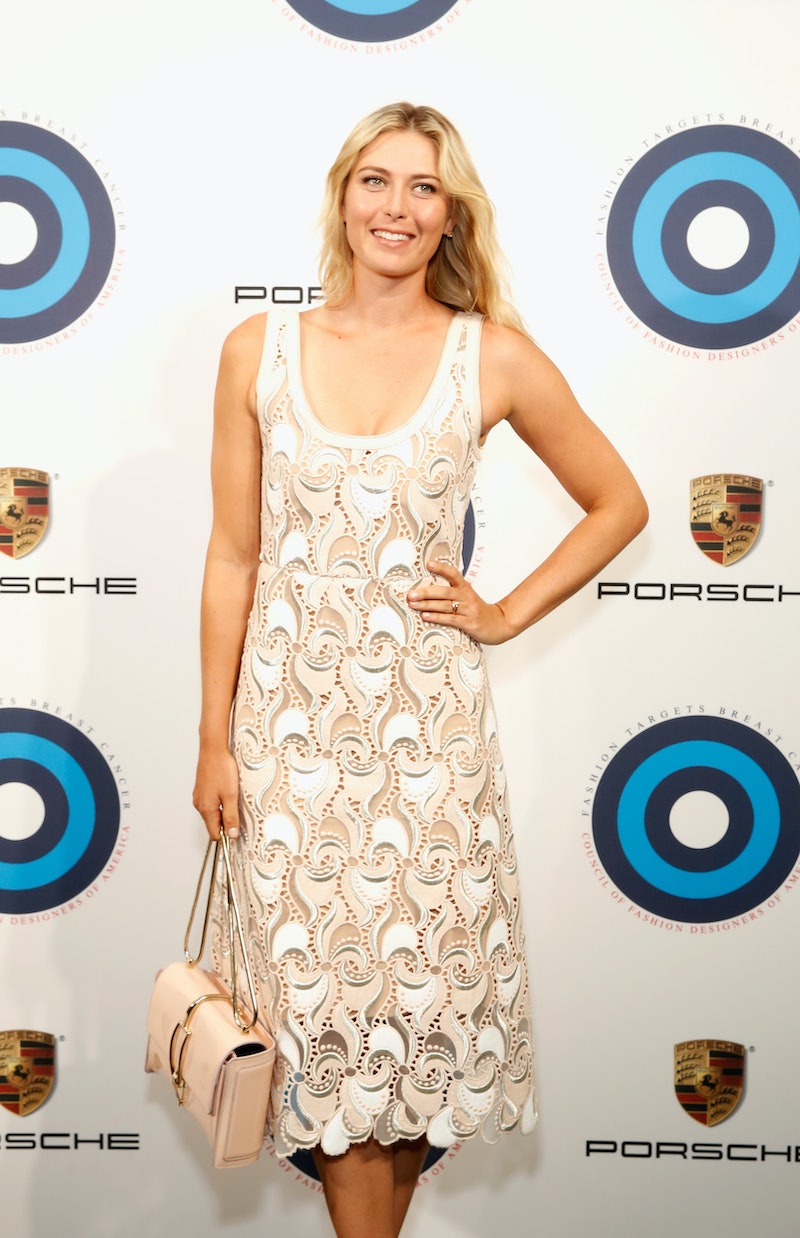 When it comes to finding celebrity style inspiration, I live by the "to each her own" philosophy. So whether you want your sense of style to emulate (or at least be influenced) by A-list actresses, chart-topping singers, smoking-hot models, or that revolving door of fashion It-girls who are simply known for their uncanny ability to pull off amazing designer outfits, that's totally fine by me. And while I typically draw inspiration from my favorite leading ladies like Cate Blanchett, Emma Watson, and Zoe Saldana, these stars may have to take a backseat for a while, thanks to one super hot tennis star and her killer style. That's right: After seeing Maria Sharapova stun in Marc Jacobs at the CFDA Celebrates Fashion Targets Breast Cancer 20th anniversary event on Wednesday, I quickly realized that the Russian athlete has a lot of inspiration to offer not just on the courts (I mean hello, Sharapova won the French Open in June), but on the red carpet, too.

Sporting a scoop-neck, midi-length, eyelet-detailed dress from Marc Jacobs; triple-strap sandals from Aquazarra; and a simple, structured shoulder bag, Sharapova gave us a refreshing dose of summer style right as the season is starting to come to an end.

Of course, the CFDA event wasn't the first time I discovered that Sharapova has some serious fashion prowess (after all, she was one of the sexiest stars on the red carpet in her Antonio Berardi mini at the 2014 ESPYs). It was simply, for me, the defining moment when the tennis star moved from the well-dressed category to a downright style inspiration–worthy star.

What's more, this delicate, casual-chic number wasn't the athlete's only on-point ensemble of the week.

Hitting a Sephora event on Monday in a red-hot J. Mendel number, the blonde beauty showed off both her style and gorgeous body in a look that struck the perfect balance between ladylike and seductive.

On the very same day, she switched style gears to celebrate her upcoming SELF magazine cover, opting for a chic Chloé LBD complete with arm cutouts and a flattering flared skirt.

Even Sharapova's more laid-back looks have been spot on over the past few days, including the jeans-and-a-tee outfit she threw on for an Evian event while sporting sleek locks and ankle-strap loafers.

So I think it's safe to say that after more than a decade of being an inspiration to athletes around the world on the tennis court, Sharapova has finally proven (in a single week, at that) that she has the style skills to inspire all the fashion lovers out there, too. Game, set, match.