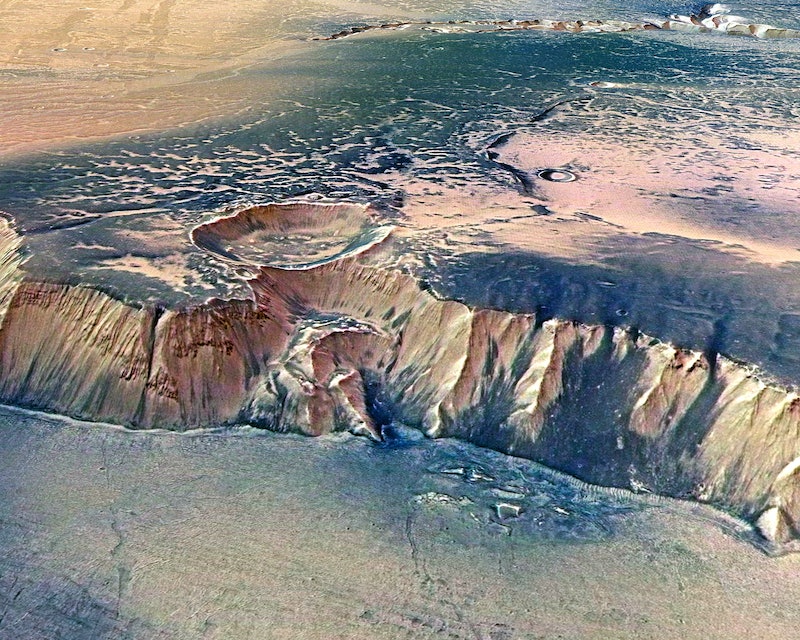 Surely, if anything could bring escalating U.S.-Russia tensions to a temporary halt, the discovery of life outside earth would be it. According to a groundbreaking report by the news agency Itar-Tass, Russian scientists have discovered sea plankton on the outside of the ISS. In other words: organisms, in space. But, uh, NASA doesn't know anything about it.

The microscopic organisms were discovered, as all the best things are, by chance. Olek Artemyev and Alexander Skvortsov, two Russian cosmonauts, were going on a casual spacewalk (as you do, when you're in the business of being a space-man) to clean the ISS exterior. According to The Daily Mail, the two Russians wiped and polished a section of the ISS' windows (known as "illuminators," in space-talk), later handing over the materials used for cleaning to be analyzed by "high-precision equipment."

This is when they reportedly found plankton and other microorganisms. "The results of this experiment are absolutely unique," said Vladimir Solovyev, the official in charge of the Russian ISS, in a statement. "We have found traces of sea plankton and microscopic particles on the illuminator surface. This should be studied further."

One of the major questions is, of course: How did the sea plankton get there? (Could it be linked to the missing Russian sex geckos, by any chance?) One possibility is that the tiny organisms were on the ISS when it launched from Kazakhstan’s Baikonur cosmodrome in 1998. But being a deep sea organism that isn't usually found in that area of Khazakhstan, that's an unlikely explanation. It's more plausible that plankton — being a "floater" organism — made its way on air currents. As Solovyev told Itar-Tass:

However the organism got there, it could be a major discovery: It will mean that the sea plankton survived cosmic radiation, sub-zero temperatures and no oxygen — for 15 years. Of course, all that's only a big deal if it's actually true, which NASA doesn't seem to think it is. Said NASA spokesperson Dan Huot to Space.com:

As far as we're concerned, we haven't heard any official reports from our Roscosmos colleagues that they've found sea plankton ... The Russians did take samples from one of the windows on the Russian segment, and what they're actually looking for is residues that can build up on the visually sensitive elements, like windows, as well as just the hull of the ship itself that will build up whenever they do thruster firings for things like re-boosts. That's what they were taking samples for. I don't know where all the sea plankton talk is coming from.